Harvest Time - September of Tanagura Town, and Revitalization of the Front of the Station

Hi, this is Takumi, doing several activities as Tanagura Supporters' Ambassador. I visited Tanagura Town since two months ago.

I have a few purposes this time. One is to take photos of autumn landscapes of Yashirogawa District, where I enjoyed the perfectly blue sky with the green paddy fields. To tell the truth, I visited Tanagura Town last autumn, which is the October, but I went and took photos of another district, not Yashirogawa. The weather forecast said that it would be perfectly sunny. It must be a great opportunity.

The other is to join the workshop. Tanagura Town Local Revitalization Cooperation Group launched a project to revitalize the front of the Iwaki-Tanakura Station by taking an advantage of an empty house there. The first action is to paint the walls and clean the floor inside.

By the way, I stayed at a Ryokan named "Atagosou" in Sekiguchi District, located in the southern east of Iwaki-Tanakura Station. The price was 5,500 yen including breakfast. I was impressed by a very talkative landlady. It was an old good Ryokan, which surprised me a lot by some large aquariums, a parakeet, and a gorgeous reception room.

So, how were the landscape photography? 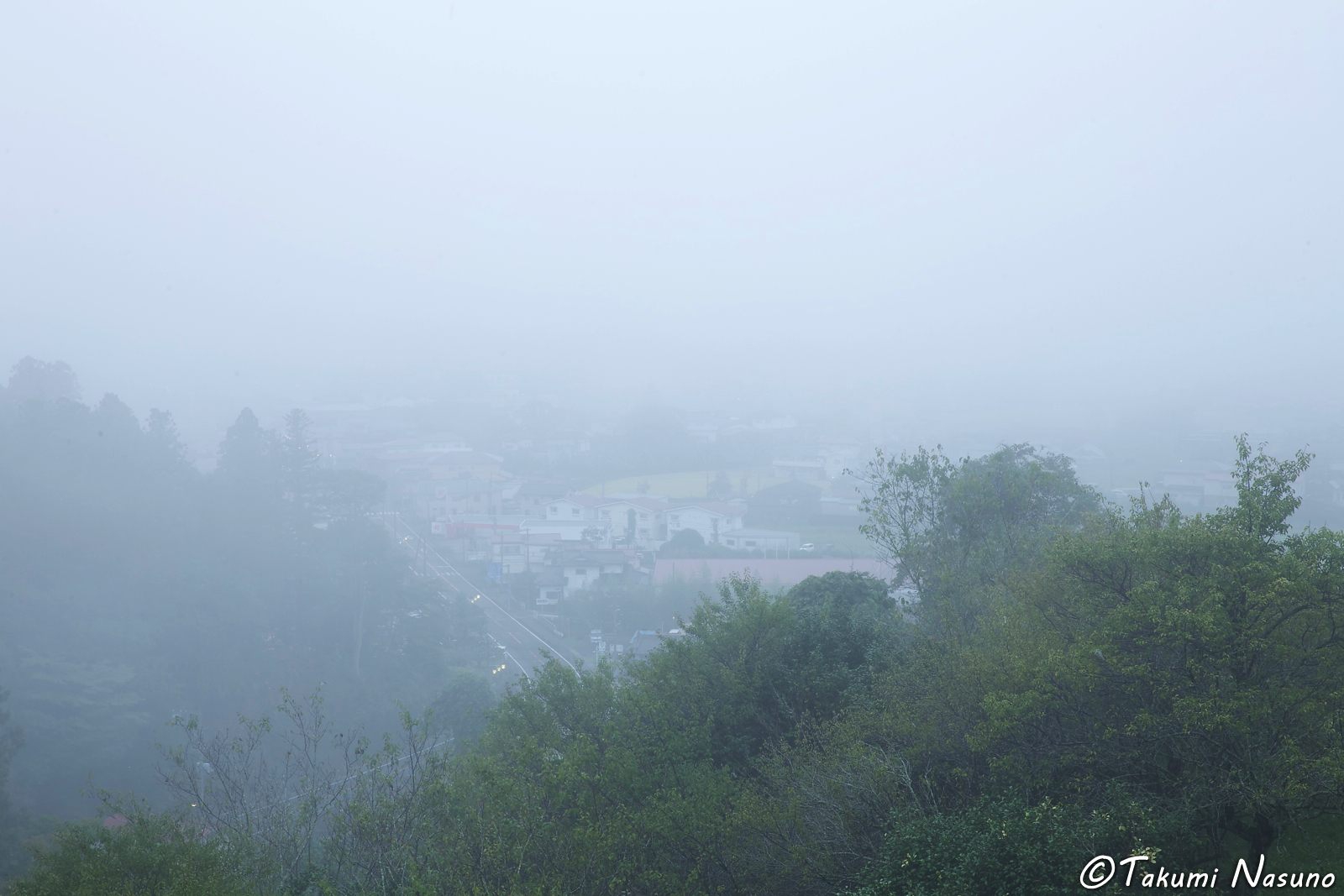 In fact, I couldn't take any photos of nights capes this time. I wrote a post about morning mist in Tanagura Town, and the same thing happened this time. We did have the morning mist. The photo above is when the mist once happened to be slightly clear. After this, the mist got foggy again. Hmm... this is one aspect of Tanagura Town. I managed to take a mysterious landscape of Akadate Park with the morning mist. There are almost nobody here in the morning and at night. I guess there are few people who encountered this landscape.

I went back to Atagosou Ryokan and took some rest, and found out that the mist did disappear. Yes, this is Tanagura. The mist only appears in the morning. I went out and found some farmers who were harvesting rice. They said that they had plenty of rain these days so today was a very happy day when they could finally harvest it. 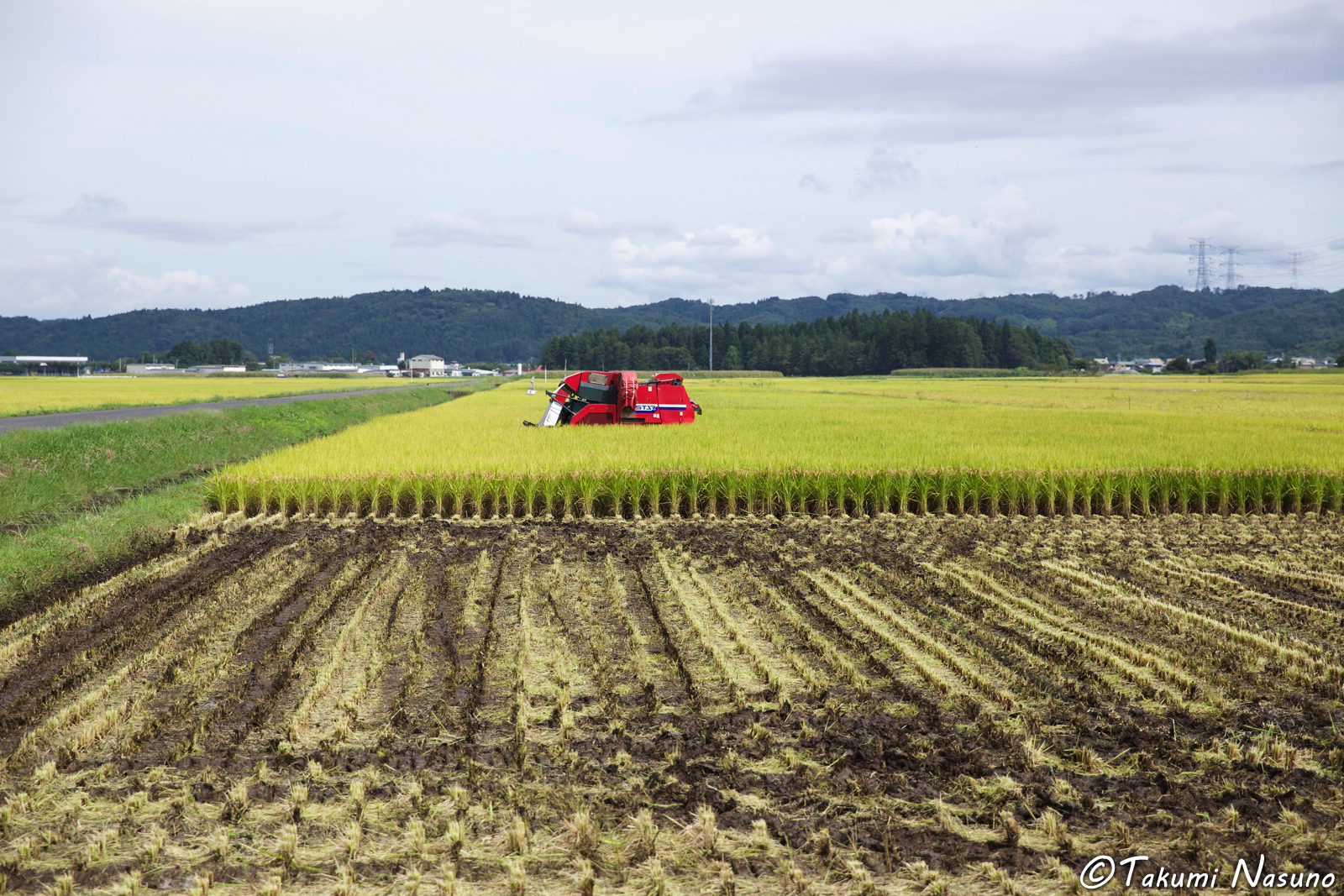 The red combine harvester stood out in the distance.

I was wearing a thick parker because I thought it would be not that warm. But it got hotter and hotter as the sun rose up. The strong sunlight shed directly to me. Ears of rice looked shining in the sunlight. It looked very warm. The red dragonfly was staying on the ear. It tells the autumn of Japan.

So, how was Yashirogawa District? 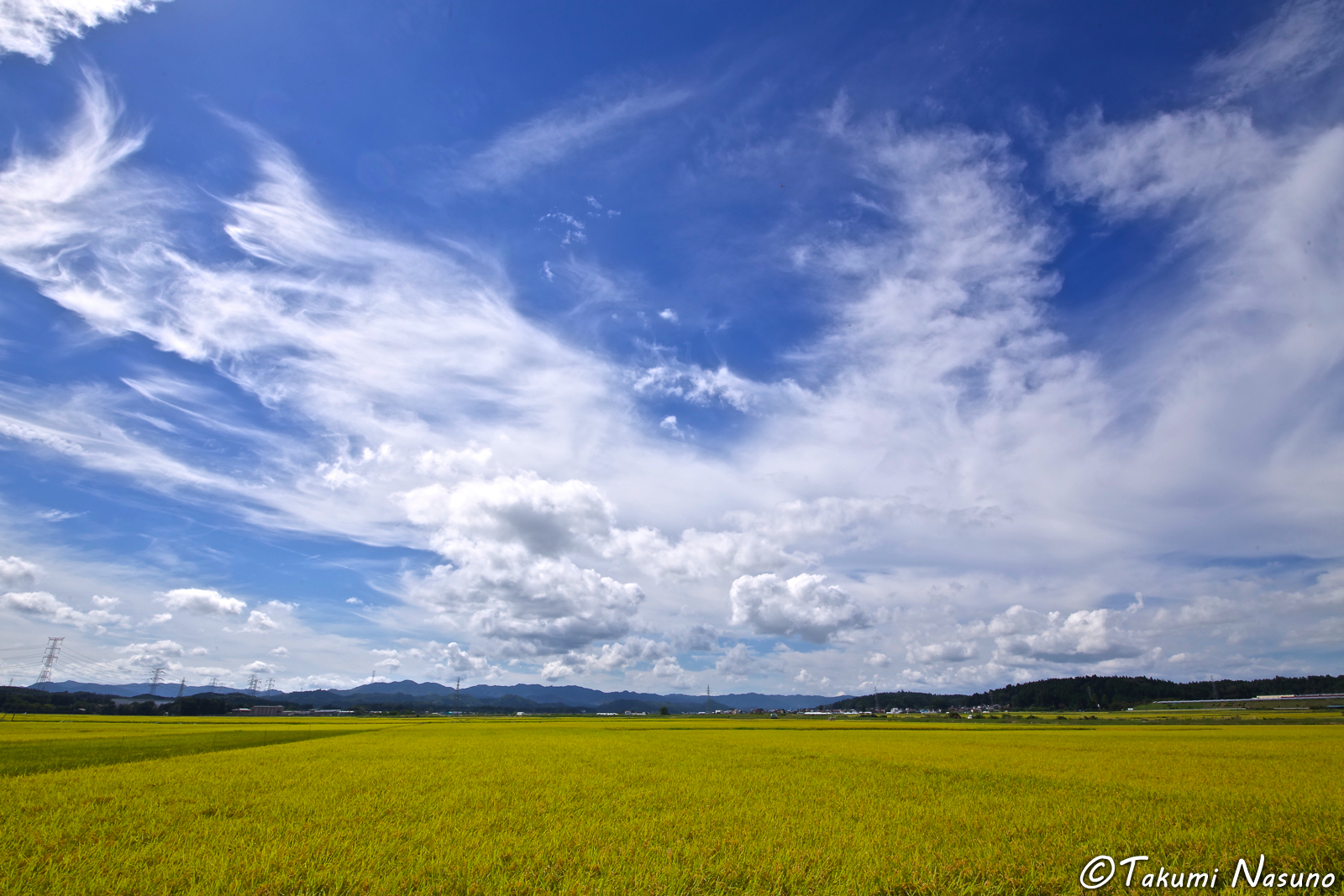 It's not perfectly sunny, but the thin clouds and the thick clouds mixed together to make this photogenic view. It made me reflect back on the summer landscapes of June. This is the June. I love them both. * smile*

And the last is the workshop. 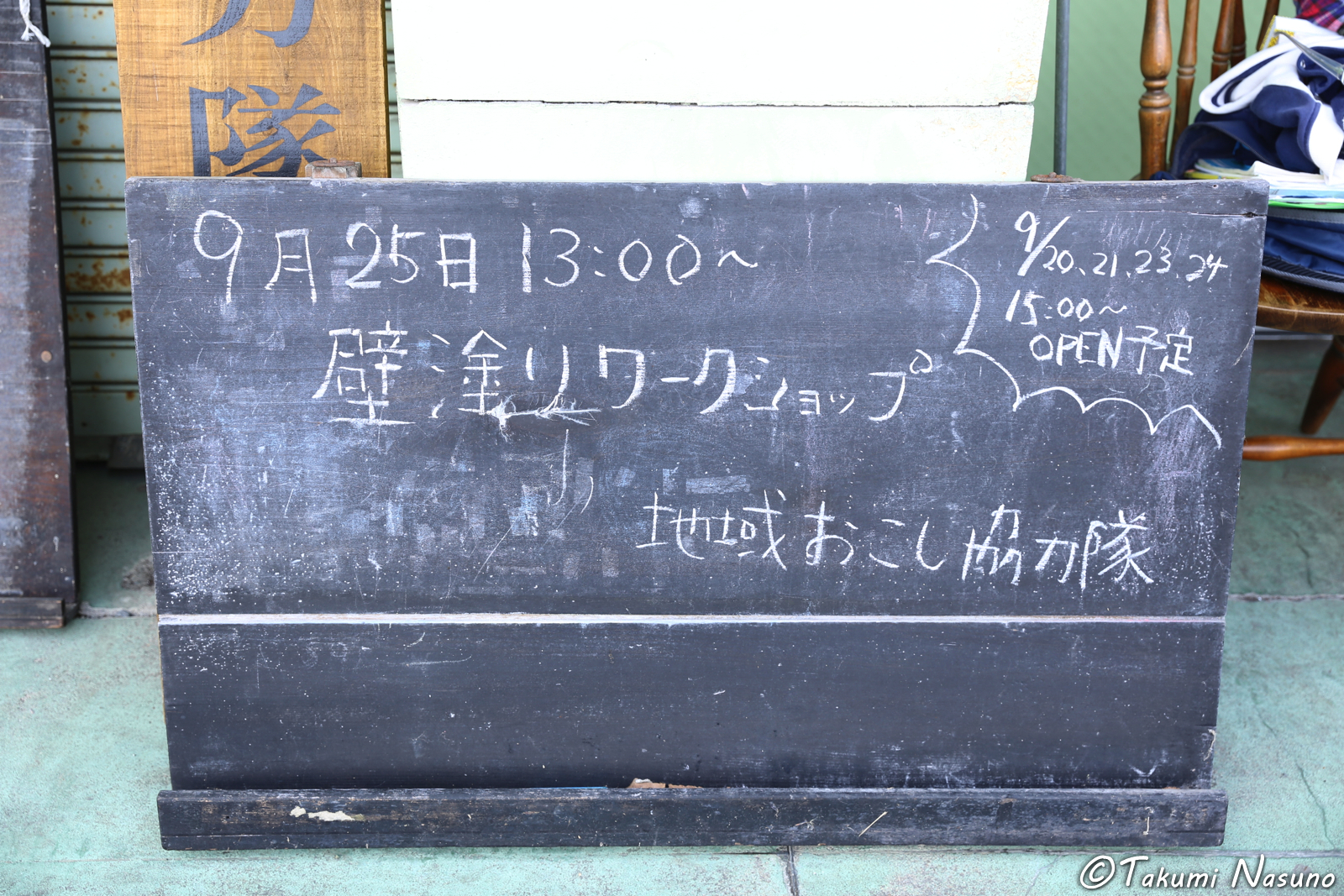 It was held by Tanagura Town Local Revitalization Cooperation Group. Here's a green building in front of the station. In the past, there were shops like a cafe and a candy store, and of course lots of people visiting there. But now this is a symbol of the empty front... This project is to renovate this building and try to revitalize the front of the station. 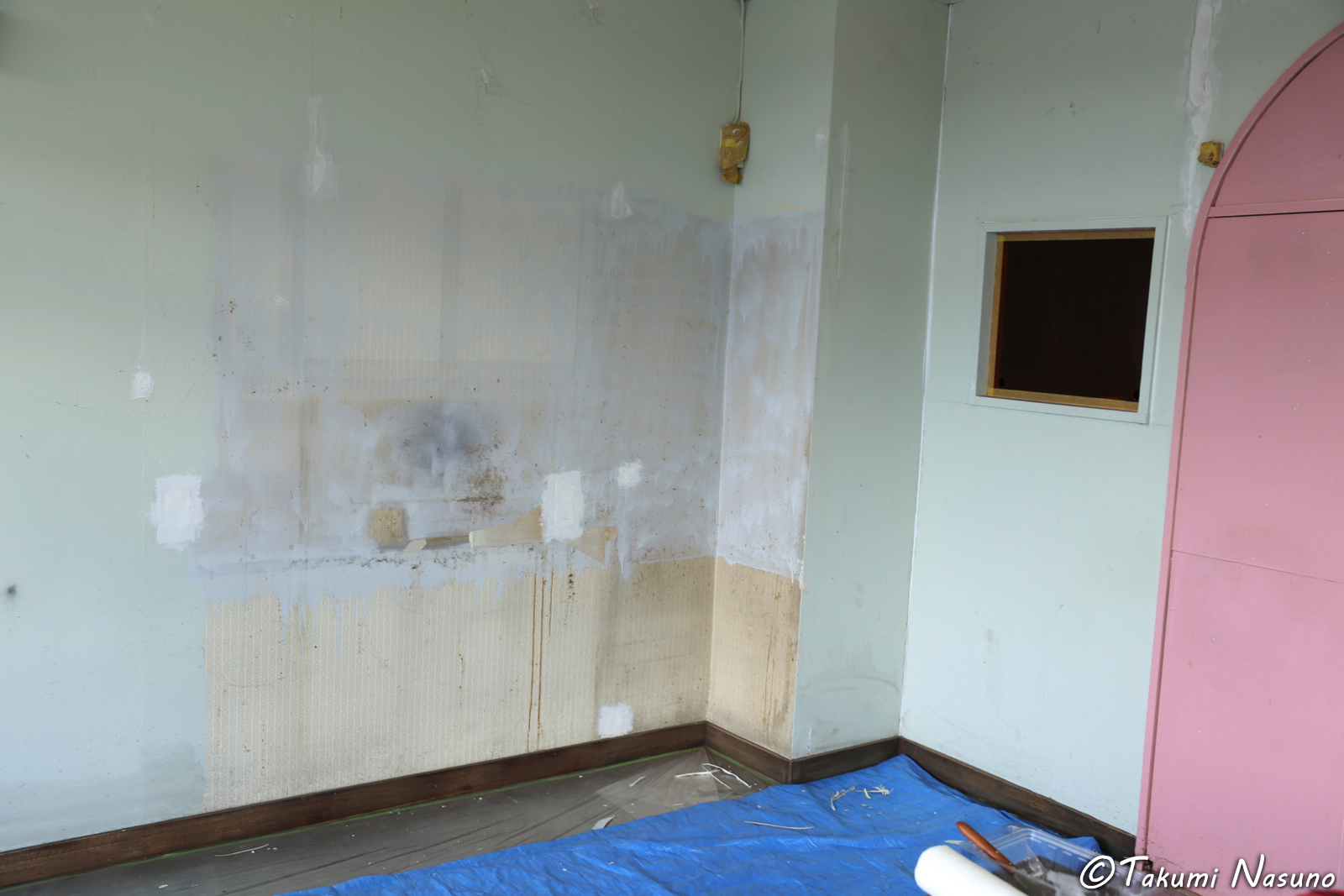 The inside is like this. The floor was dusty, and the some parts of the walls were peeling off. This is far from "clean". We cleaned it and... 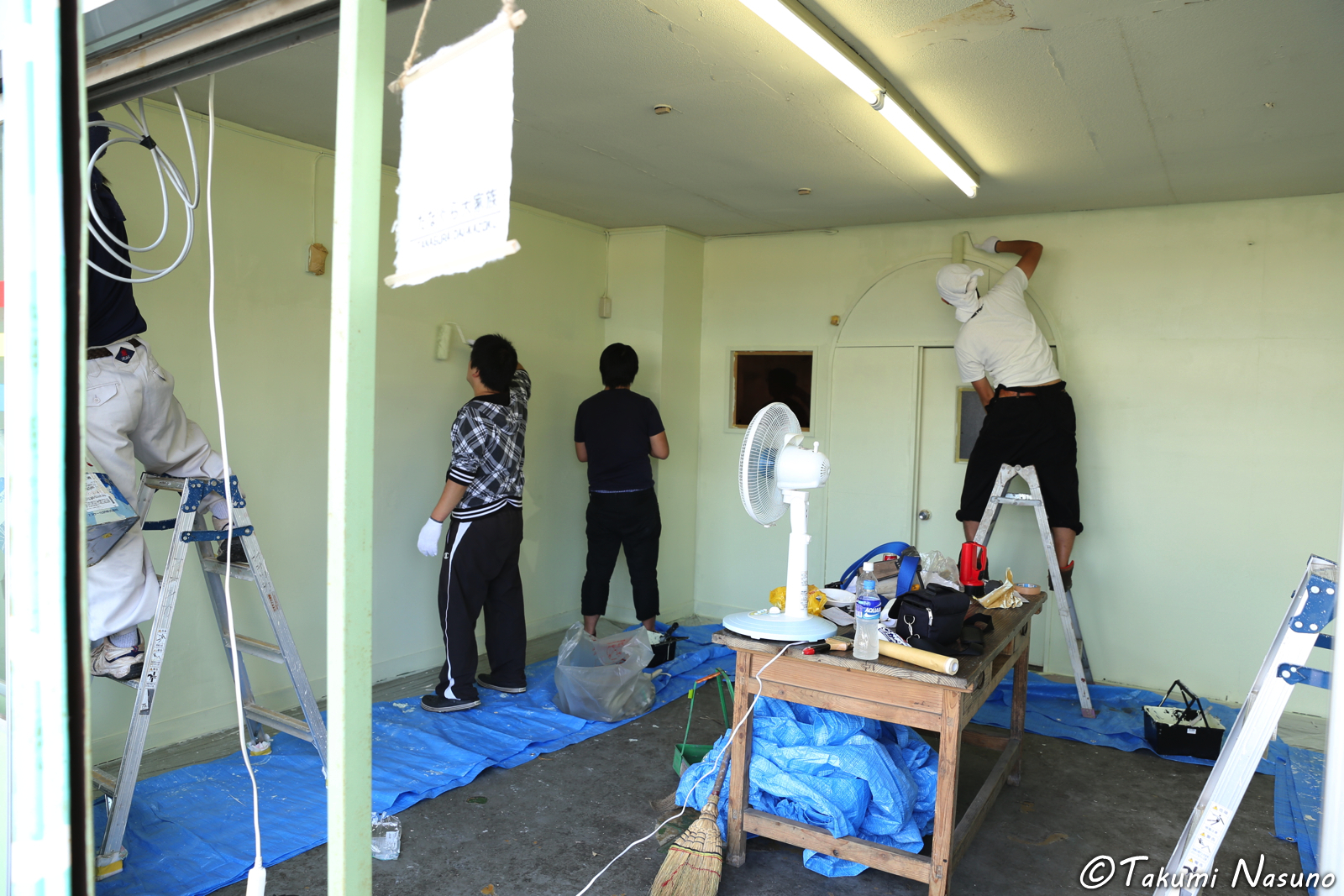 We painted the walls twice! We managed to finish it thanks to a large number of the participants (8) and a special support by the professional. However, we have plenty of problems including floors, ceilings, water, rooftop, etc. We need to solve these problems one by one.