I find it very important to reflect on the past like this because it changed my mind and made me believe that the paddy fields of Yashirogawa District is rather more popular than the Weeping Sakura tree of Hanazono. 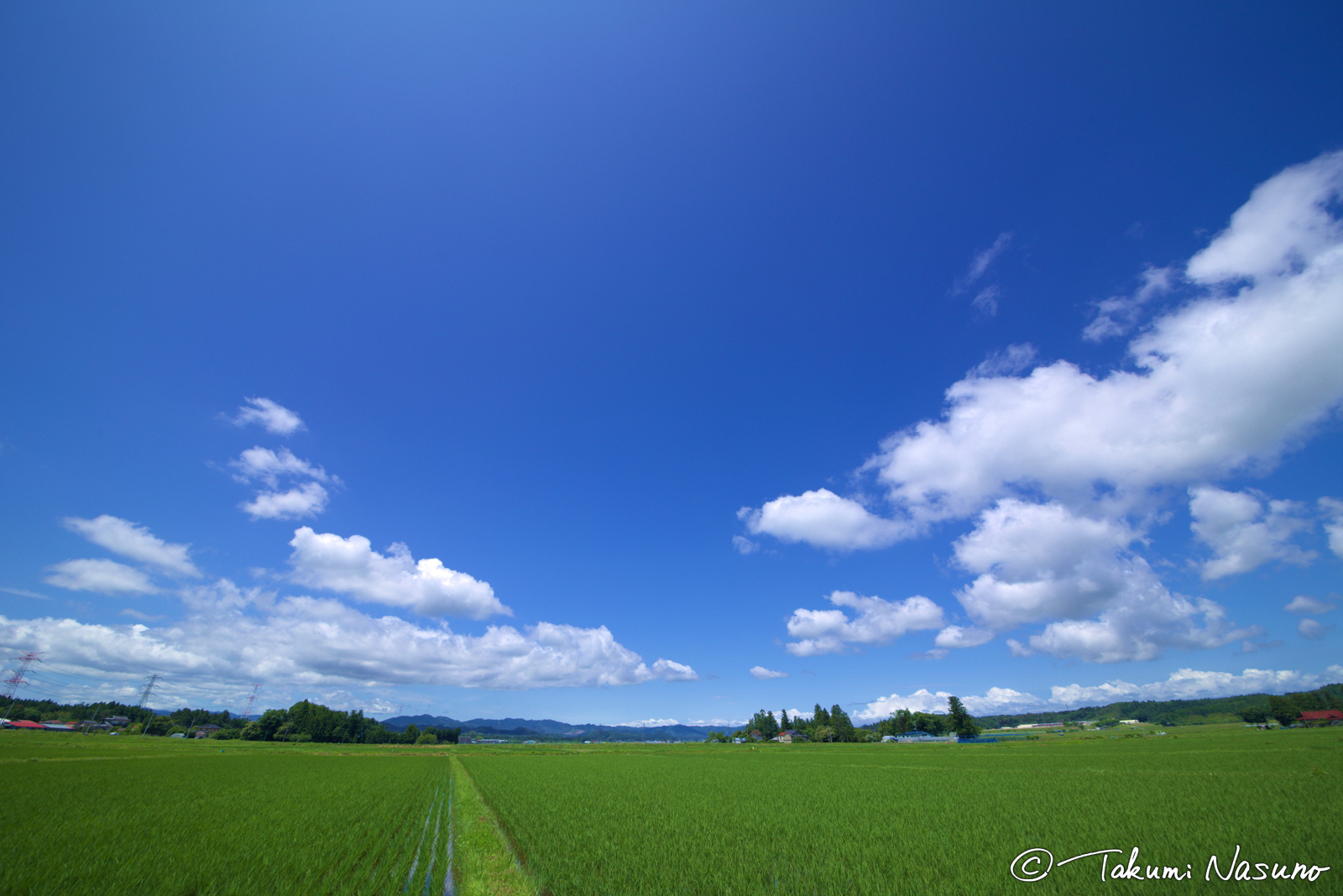 As a Tanagura Supporters' Ambassador, Entry to the tanagura Town tourism photo contest is my essential objective every year so that I support local revitalization of Tanagura Town, Fukushima Prefecture. While I usually do not participate in any photo contests, thry are exceptional because they match my belief to influence and move people through photography on the context of local revitalization.

Following the two awards in 2015 won by the photos titled "When the sunshine through the foliage spread among the mist" and "This is why Yashiro rice is delicious!", I won the Evening Tanagura Newspaper Company prize by "Competing with the Lanterns" in 2017. Although I had recognized that the former two photos have been used in various places, what I did for them was only to share them on SNS when I recognized them.

I decided to summarize how my photos have been used because this process is very important in reflecting on how I have contributed to Tanagura Town as a Tanagura Supporters' Ambassador. It must be a hard work, but a scheduled termination of the term as the ambassador at the end of this month made me go forward. Please enjoy the photos. 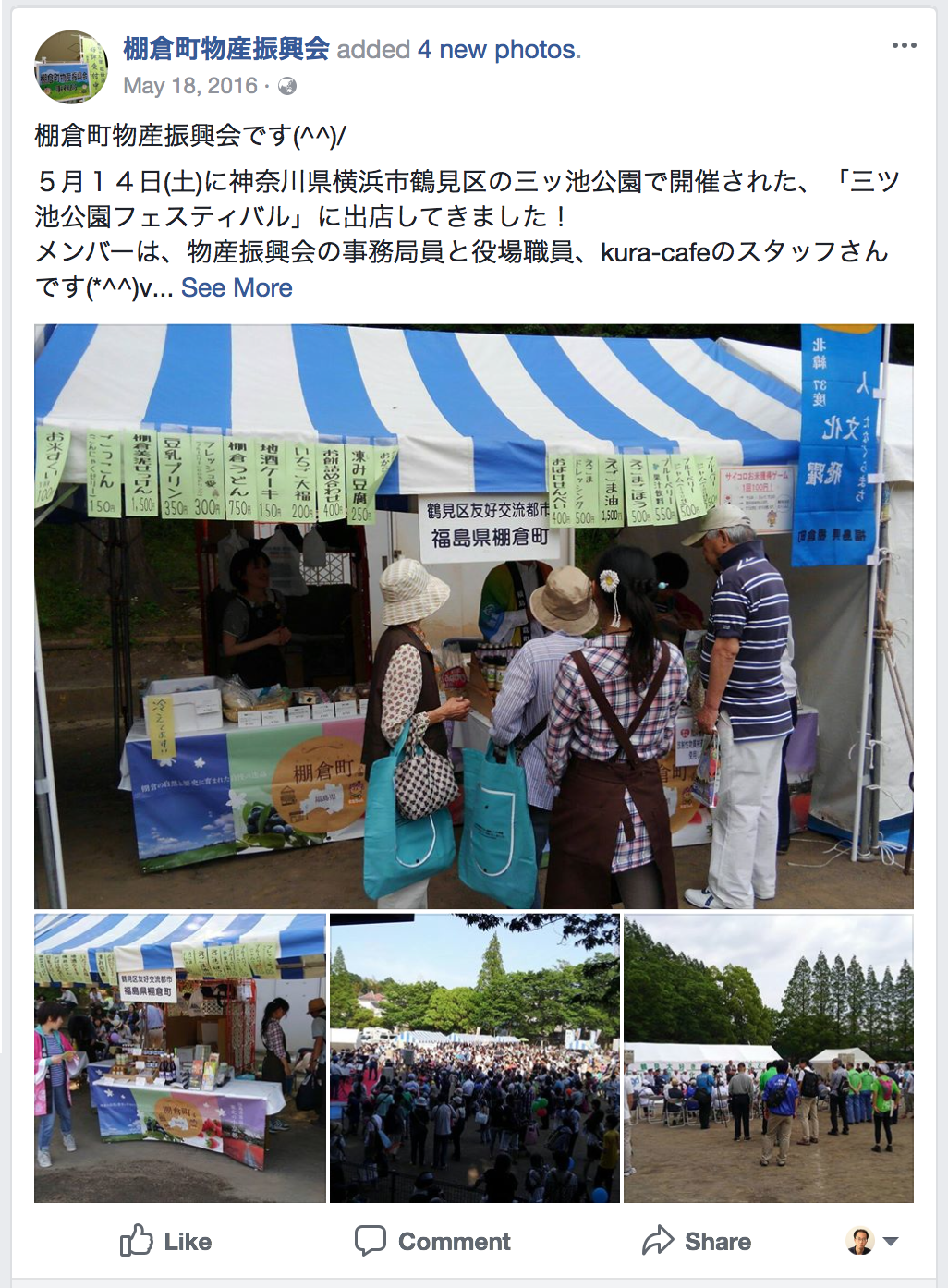 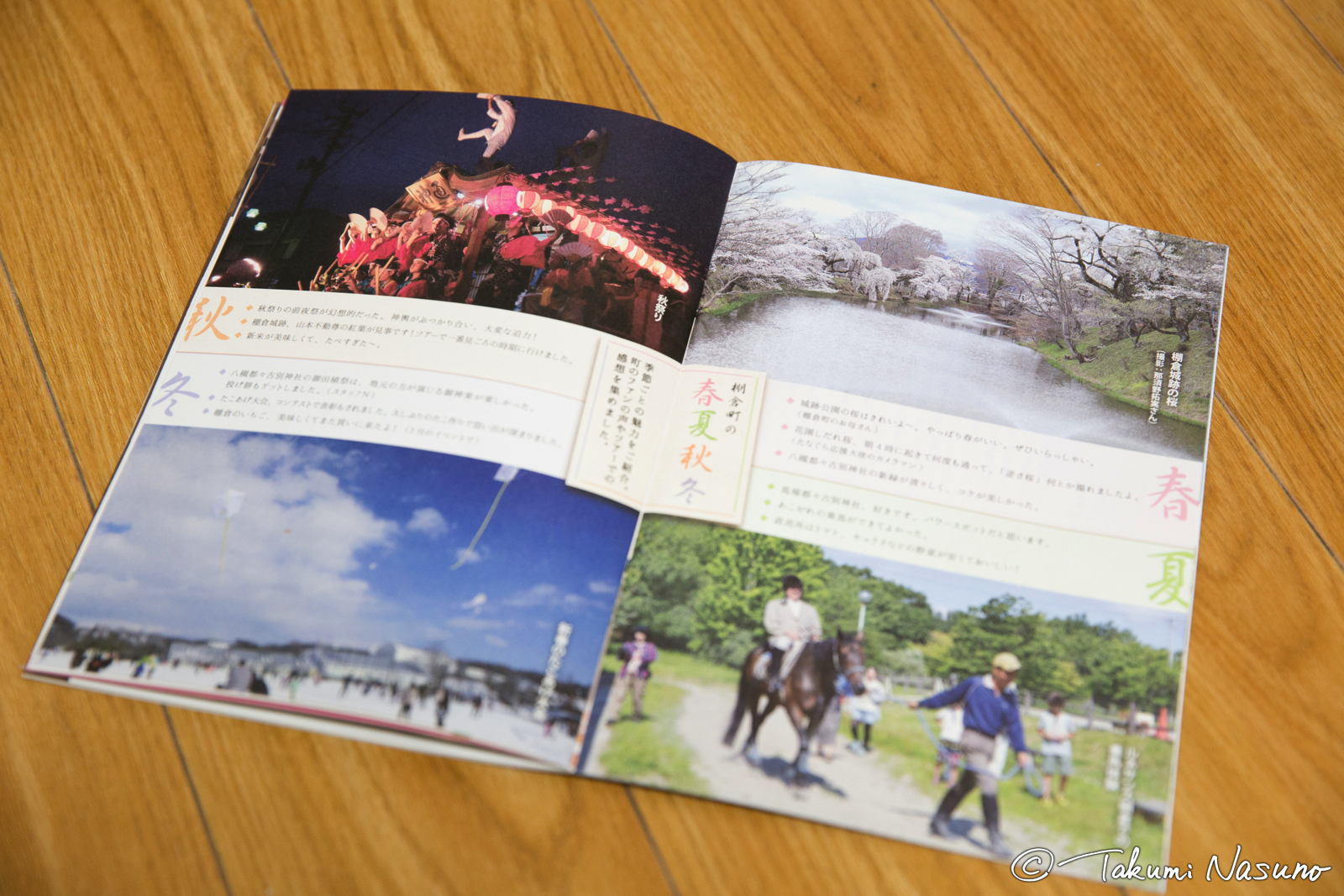 4.Adopted on the official website of Fukushima Prefecture as an introduction of the Weeping Sakura tree of Hanazono (March 21, 2017) 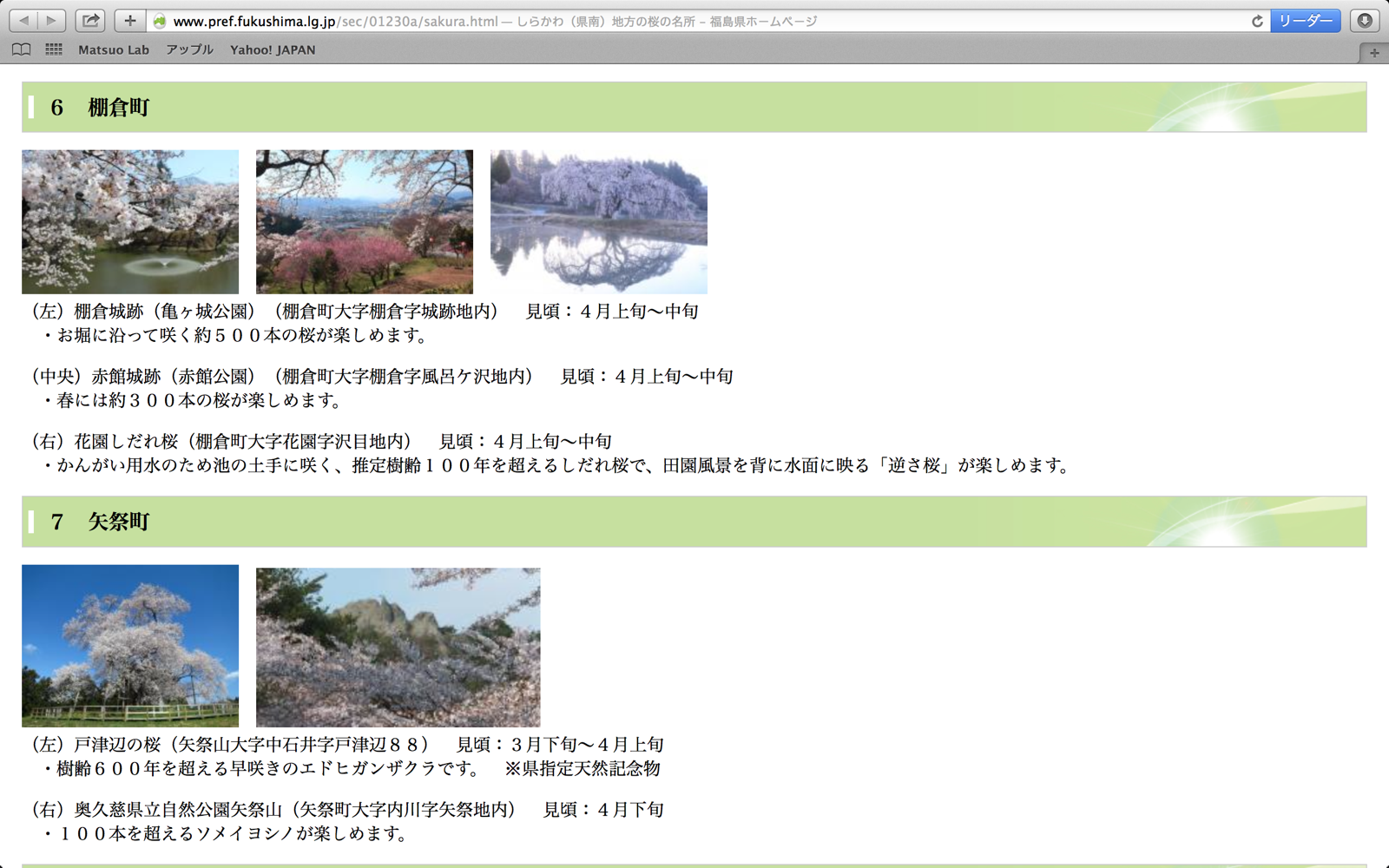 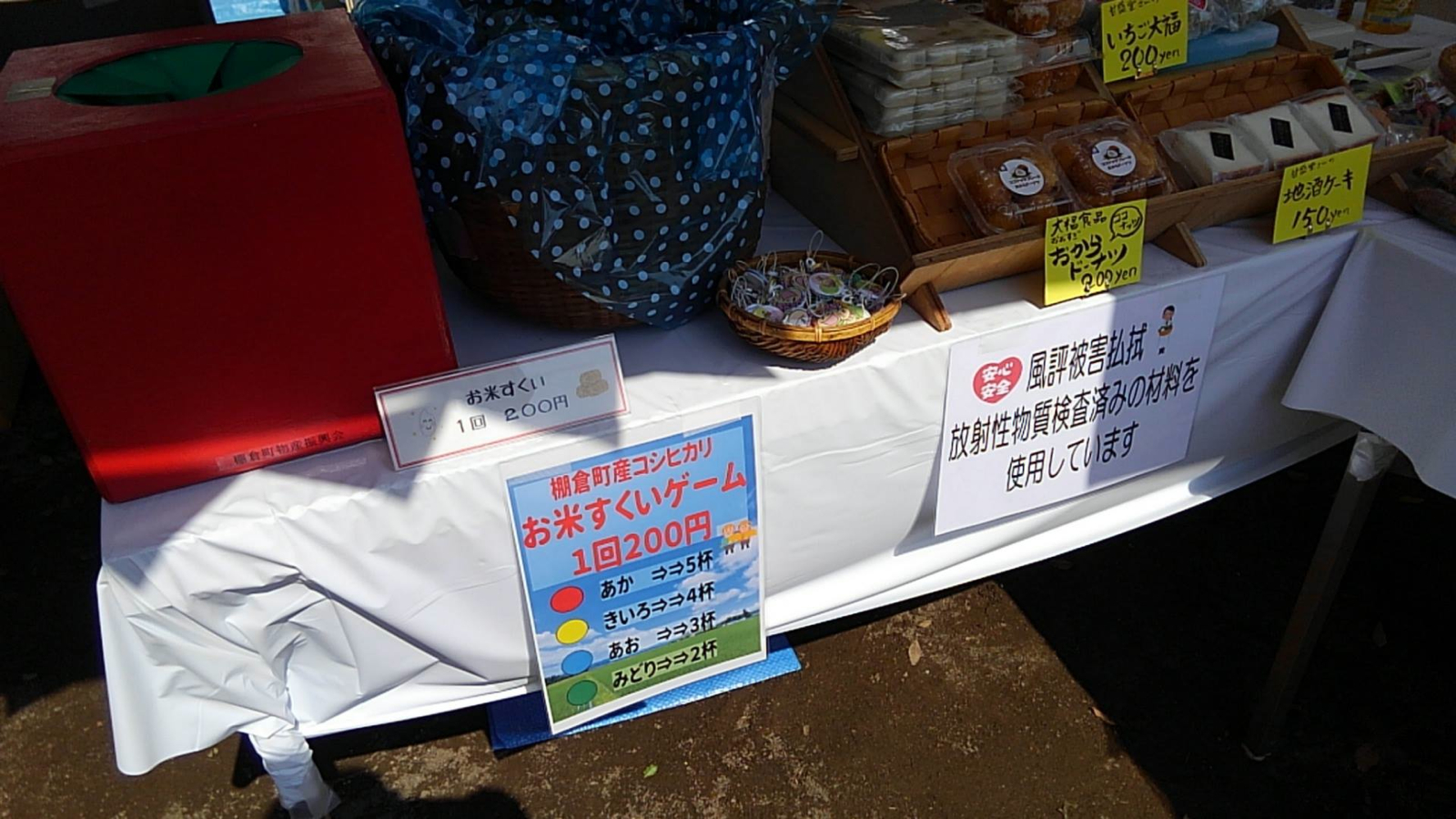 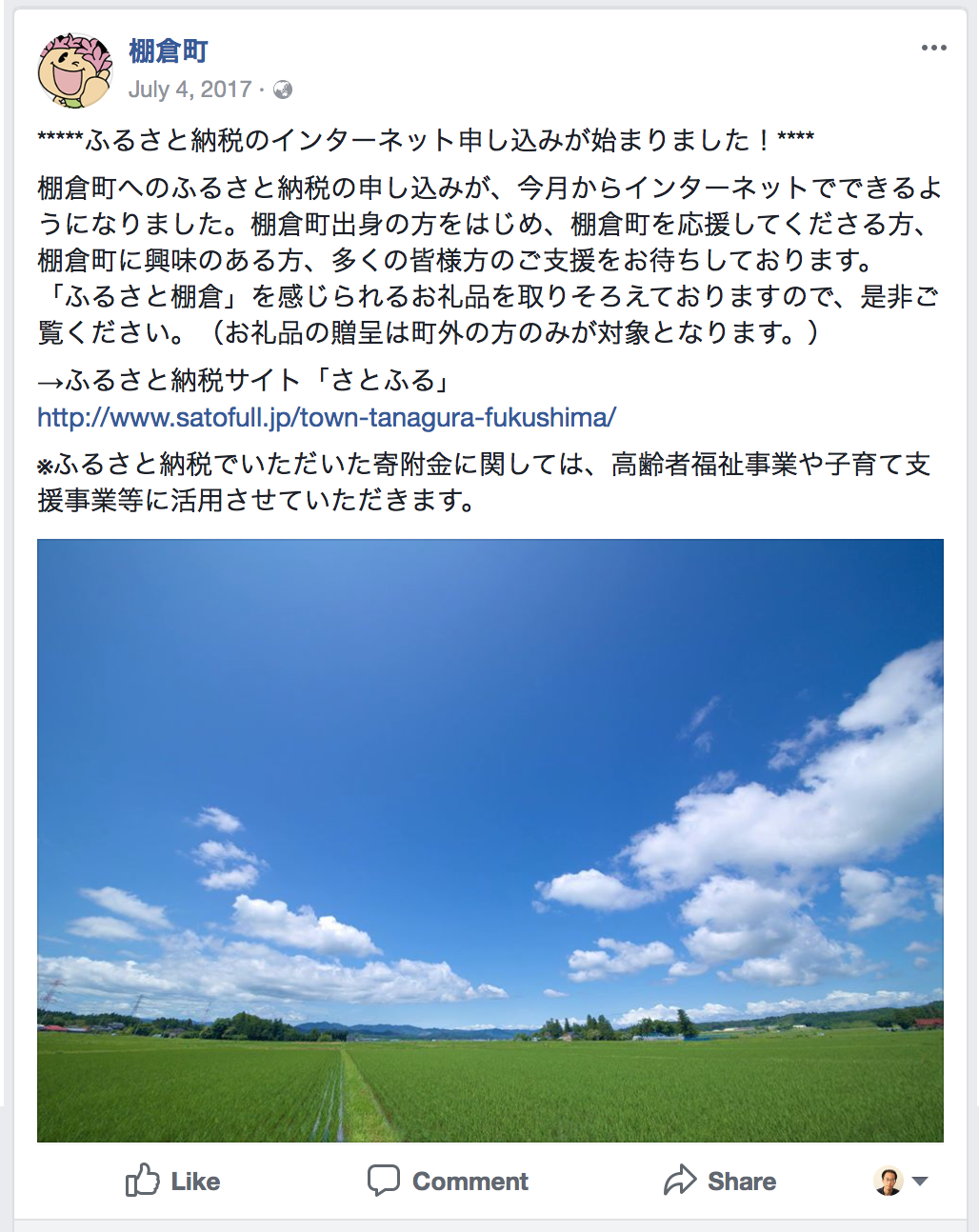 9.Adopted on the surface of Tanagura Town immigration Guide (November 24, 2017) Although it is hard to recognize, the photo of the blue sky on the center of the photo is the catalog. 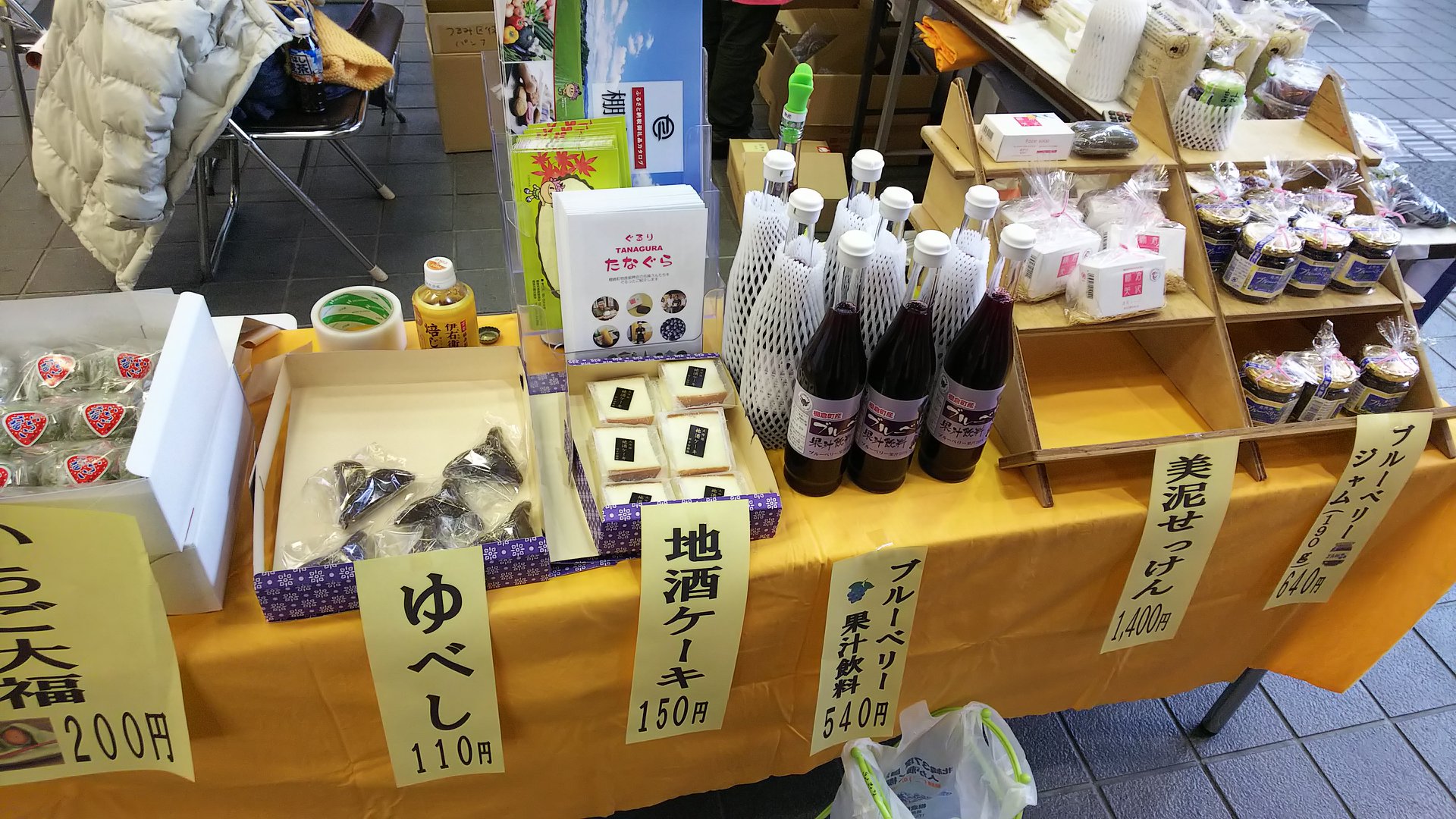 11.Contributed to the cooking class of local foods with aunties from Tanagura Town (February 7, 2018)

I contributed some of my photos of Tanagura Town to the cooking class of hosted by Fukuwarai LLC, of which the former manager of kura-cafe, Mrs Nakamura, plays a role as a representative. There were 8 photos appearing, 5 of which were from my album. (The top center, middle right, and all of the bottom are mine.) 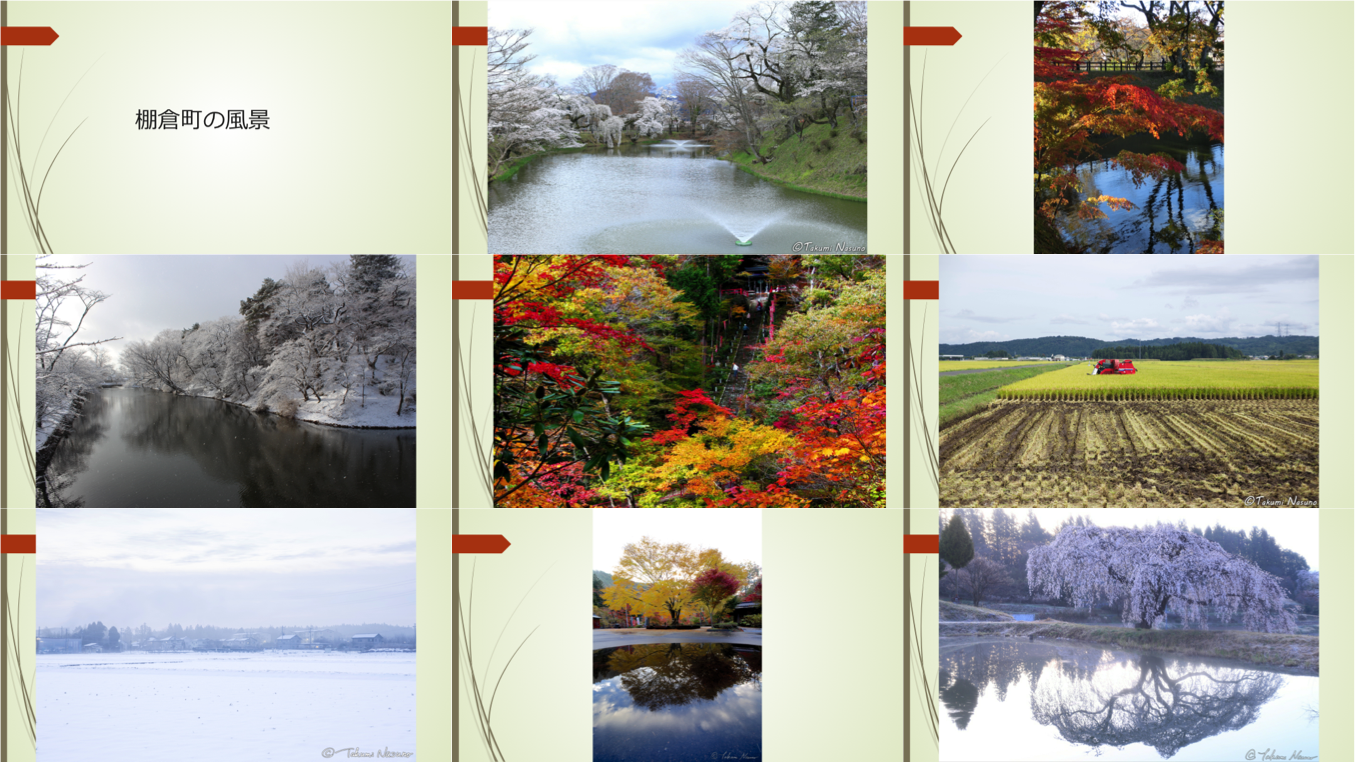 12.Adopted on the back of leaflet for Nihonbashi Fukushima Mall Midette (Februrary 9, 2018) 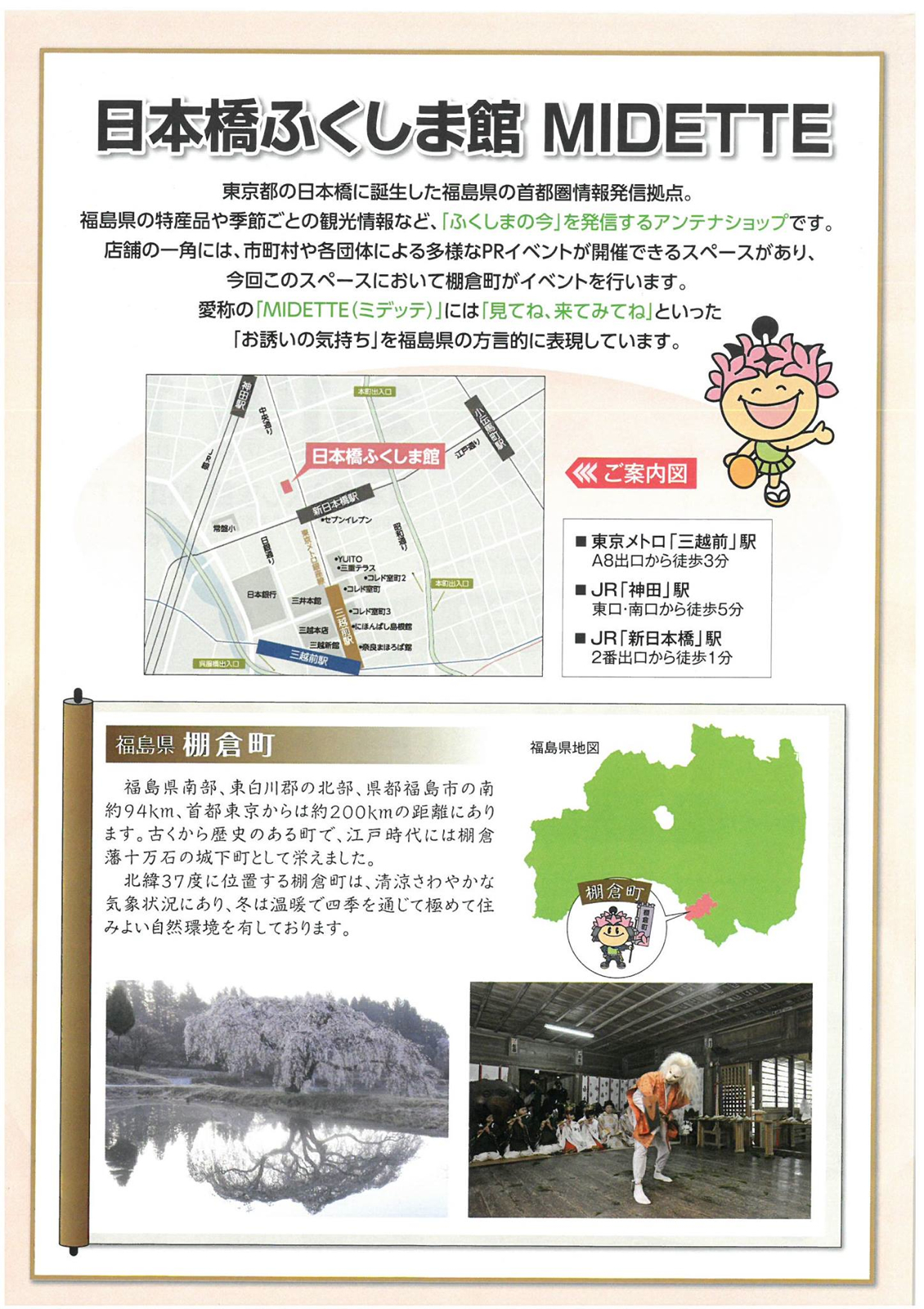 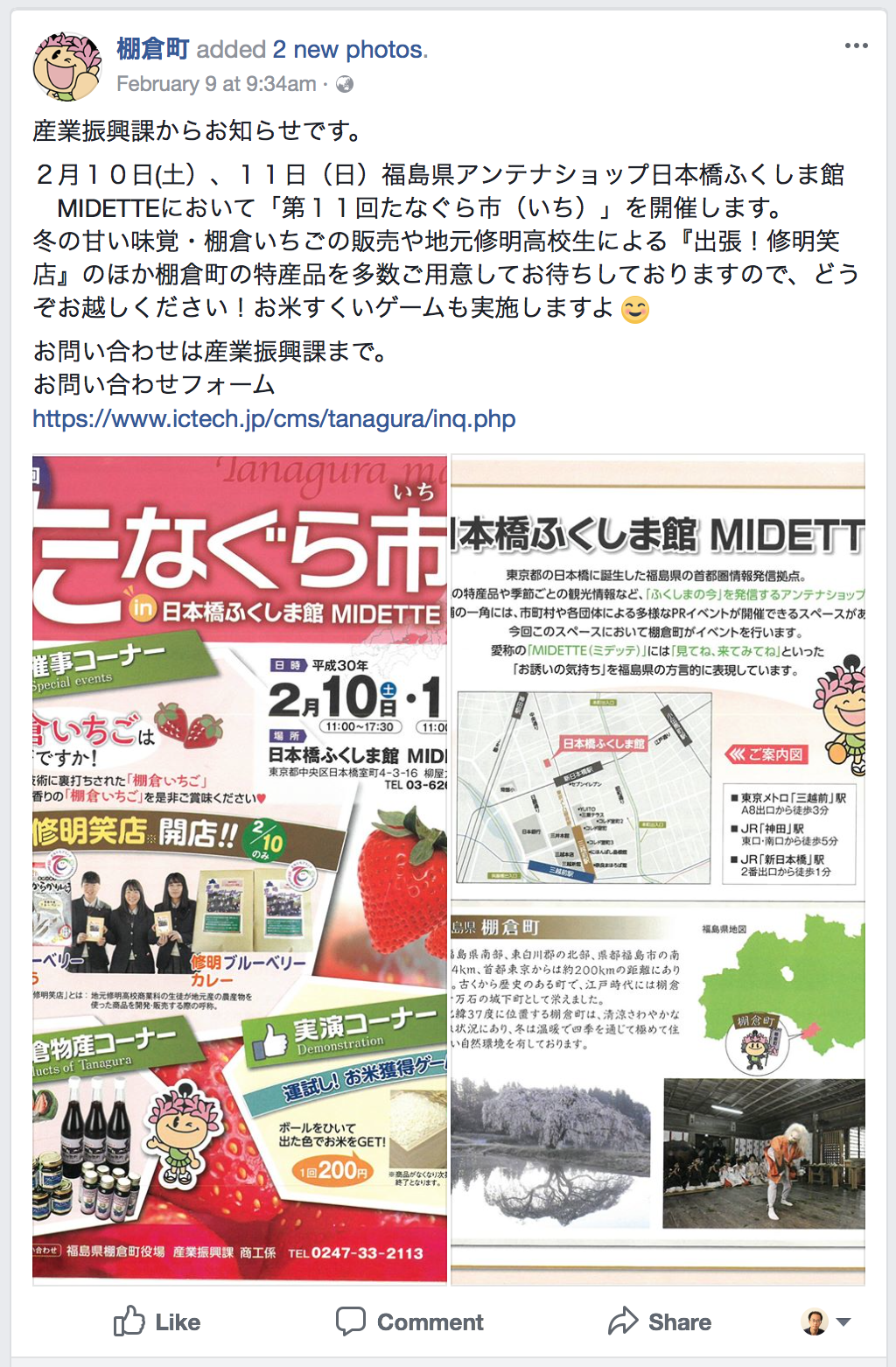 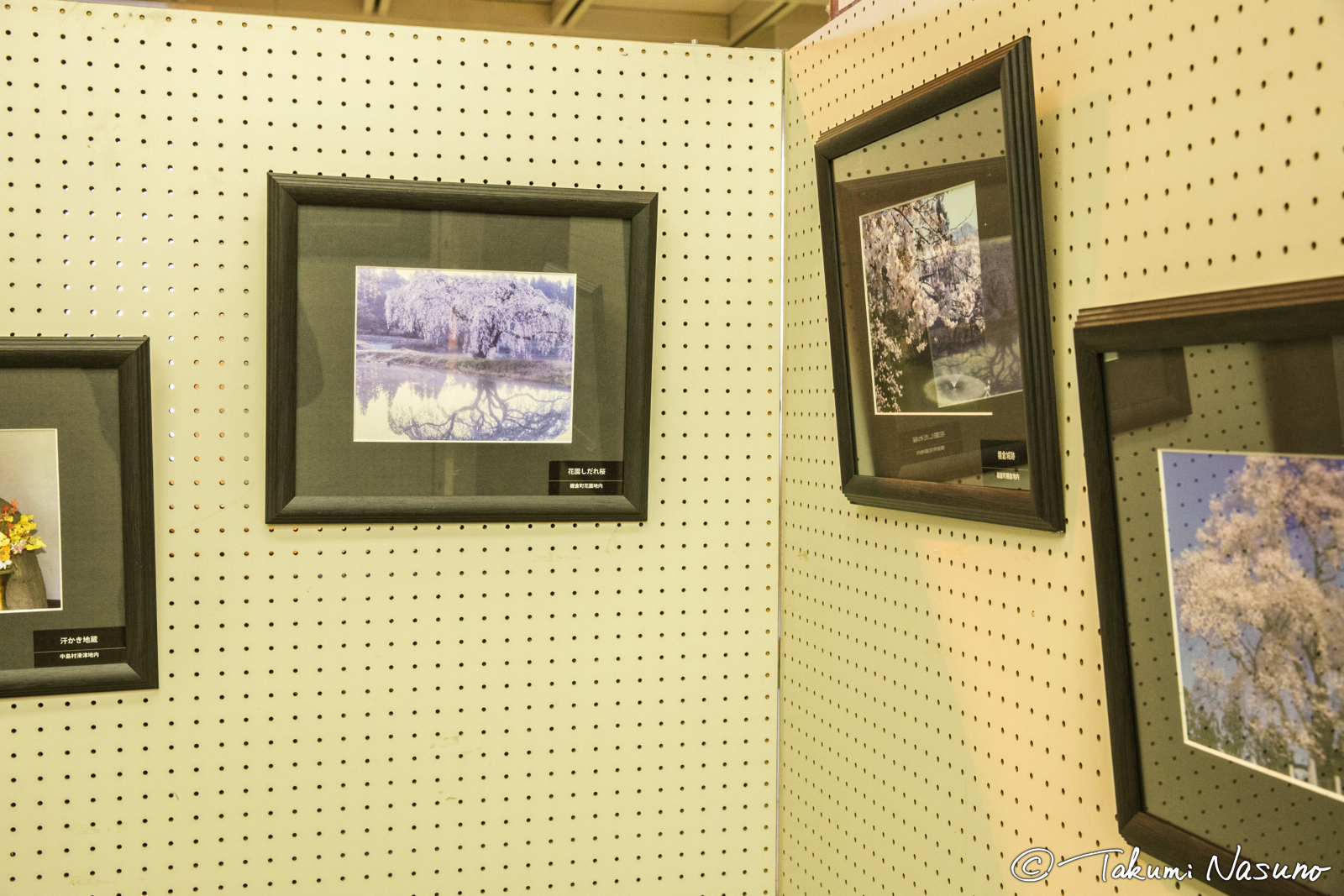 While the photo of the Weeping Sakura tree of Hanazono appears a lot, the photo of the paddy fields of Yashirogawa District appears much more thanks to the collaboration with Yashiro Rice and Furusato Tax, I noticed.

I reckon that there must be few photos which have been used on media more often than these two because there are 10-20 photos winning awards every year. Although I wonder how they can use "Competing with the lanters" winning the Evening Tanagura Newspaper Company Award because this photo represents a very rare situation, I wisht that they can in any case.

Enjoy the posts of the same category! Local Revitalization
2018/03/03
Thanks for using my photo of the Weeping Sakura Tree of Hanazono at Shinshirakawa Station Museum!

Author of this Blog

Takumi Nasuno. Tanagura Supporters' Ambassador (Official supporter of Tanagura Town of Fukushima Prefecture). A man who recommends TRIPLESSO just as he likes. A multi-language blogger for mainly nature photography. Currently I'm off from my main job (knowledge management and data analytics) and devoting myself to childcare for my newborn baby for half a year.
Blog Category
Copyright (C) 2014-2019 Takumi Nasuno. All Rights Reserved.