Sky of Tanagura Town - I Enjoyed the Sunny Blue Sky, the Sky with Waving Clouds at Dusk, and the Sky with Sparkling Stars in One Day!

I won a prize at Tanagura CM Contest!

Although yesterday was a weekday, this is why I visited Tanagura Town to attend the award ceremony.

Of course, what I had done this time was not only attending the ceremony but also taking photos of the landscapes of Tanagura Town!

This time, especially the "Skys" were awesome. Here are 10 photos of the sky from Tanagura Town. They were all taken in only one day. It is sincerely great to see the wide, clean sky.

The Sky from Tanagura Town No.1 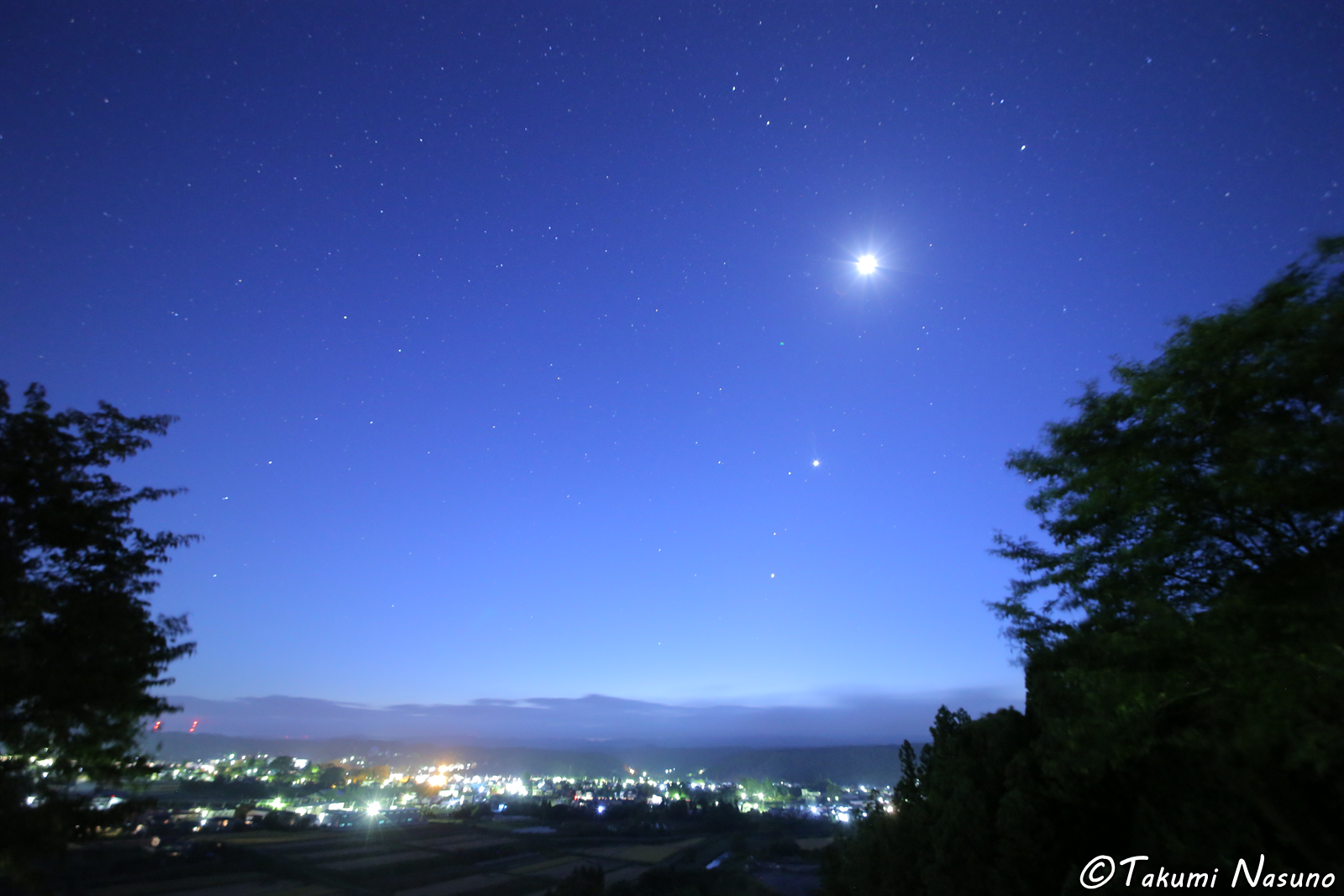 I arrived at Tanagura Town. It was totally dark because I got off from the bus at Shin-shirakawa Station at 4 o'clock in the morning. It was as cold as it had been this April. The air was clean and beautiful. Although the moon was shining in the sky, the stars were also appealing not to be defeated!

The Sky from Tanagura Town No.2 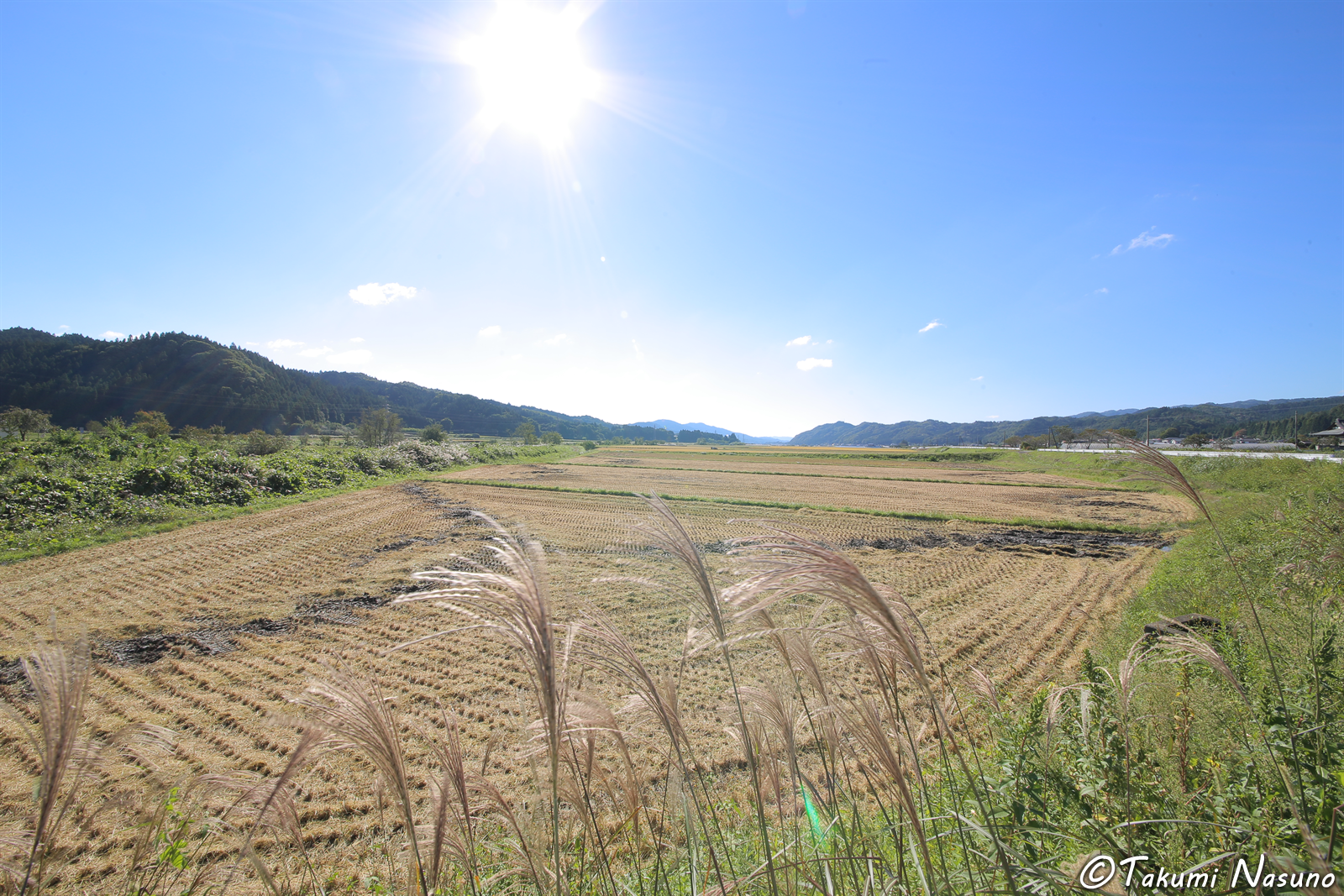 After the sun appeared, the sky got perfectly clear with almost no clouds. The coldness of this morning was like a dream while the strong sunlight welcomed me. The harvesting of the rice appeared to be finished.

The Sky from Tanagura Town No.3 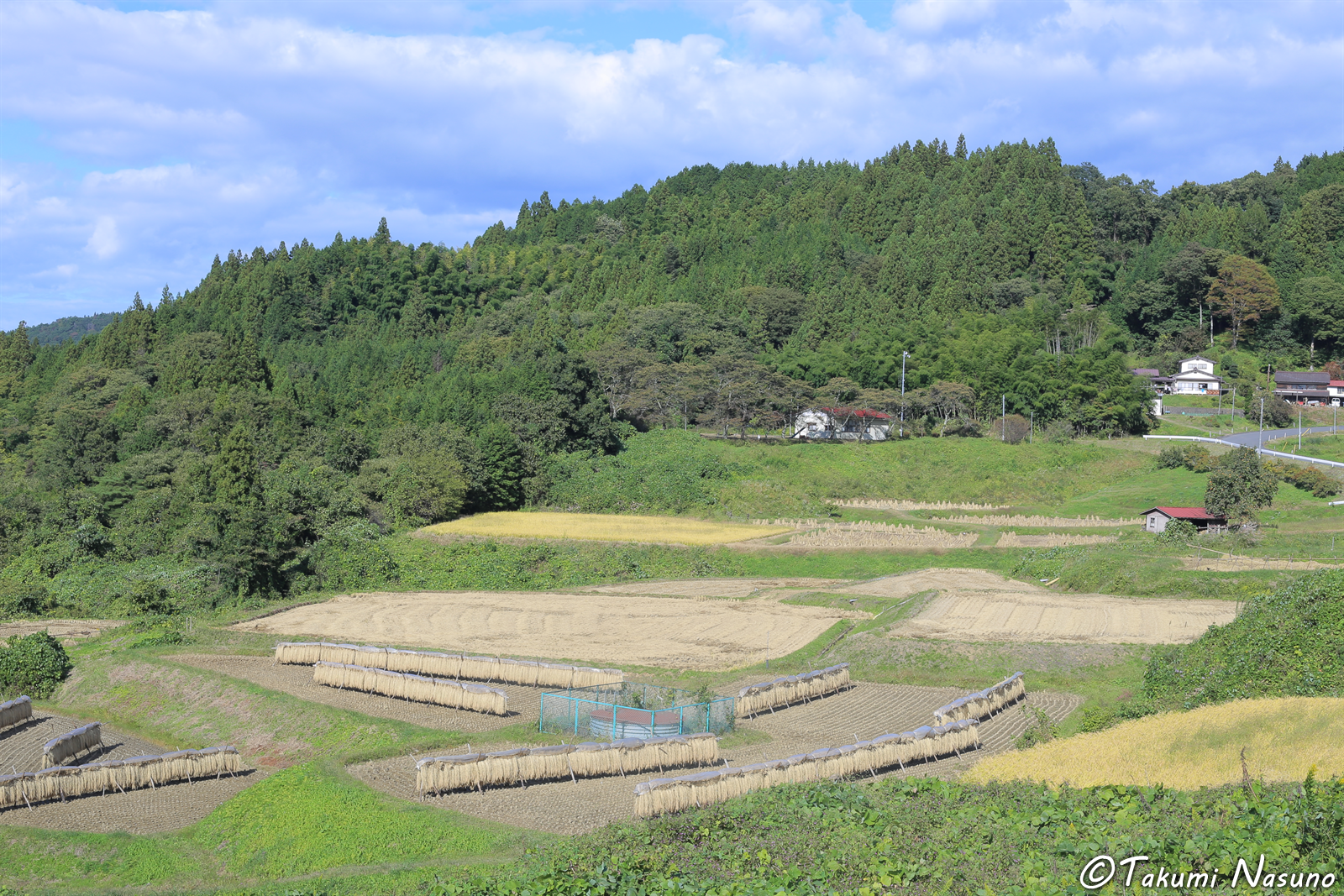 They seemed to finish harvesting at the terraced paddy fields of Fukuoka District so they started to dry rice straw there. In the afternoon, we had a bit more clouds. The strong wind blew the clouds. I took this photo right at the moment when there was no cloud above and the paddy fields had no shade. The forward light resulted in the nice contrast between the blue sky and the green woods.

The Sky from Tanagura Town No.4 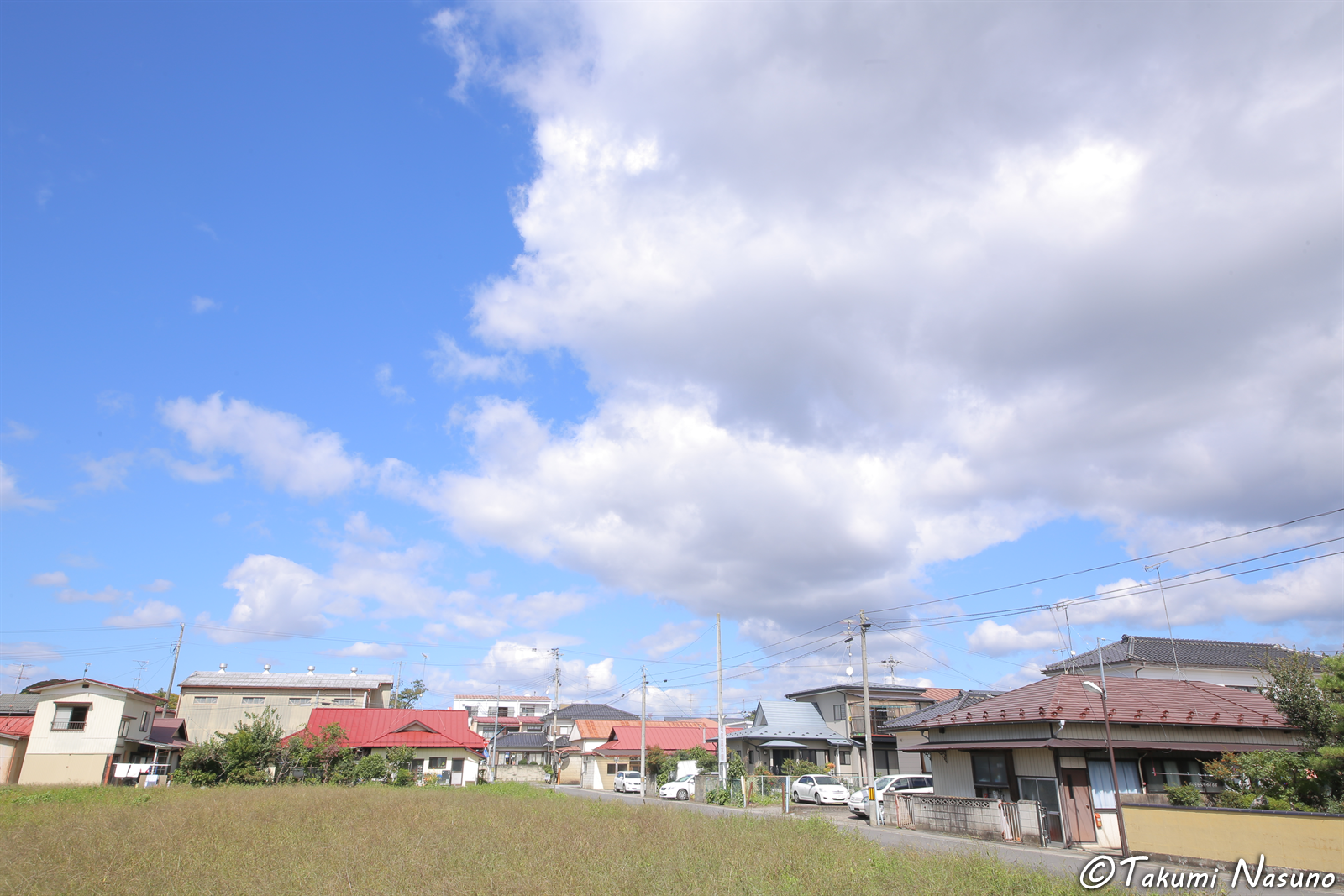 The sky was being wide even from the center of the town. As there were almost no high buildings there, the big clouds appeared with a big presence.

The Sky from Tanagura Town No.5 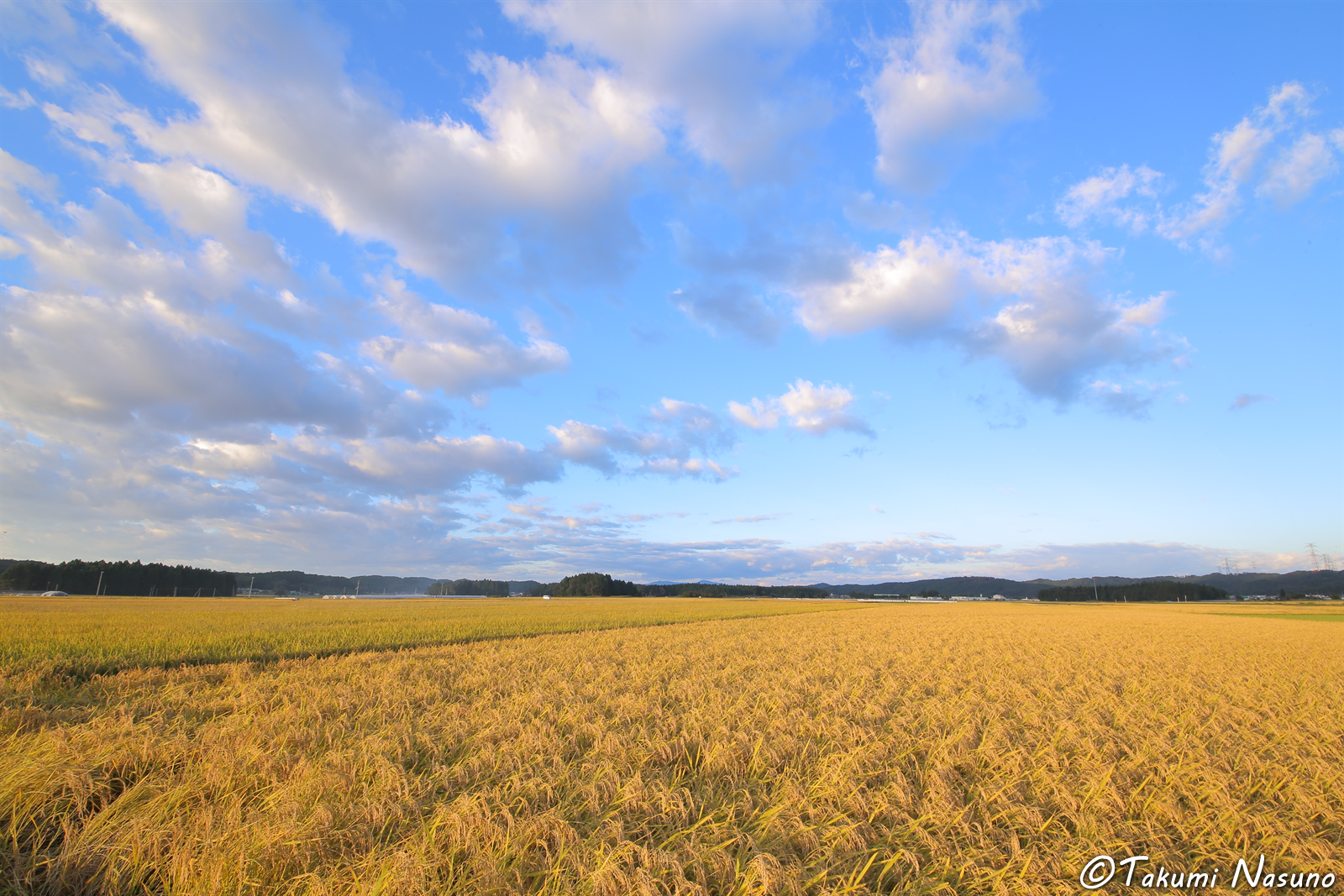 There were some areas where they were yet to harvest. Here's one from Yashirogawa District. As the sunset time approached, the golden rice straw started to shine in orange. The fast-flowing clouds were staying throughout the afternoon. I was a bit worried whether I could see starscapes tonight.

The Sky from Tanagura Town No.6 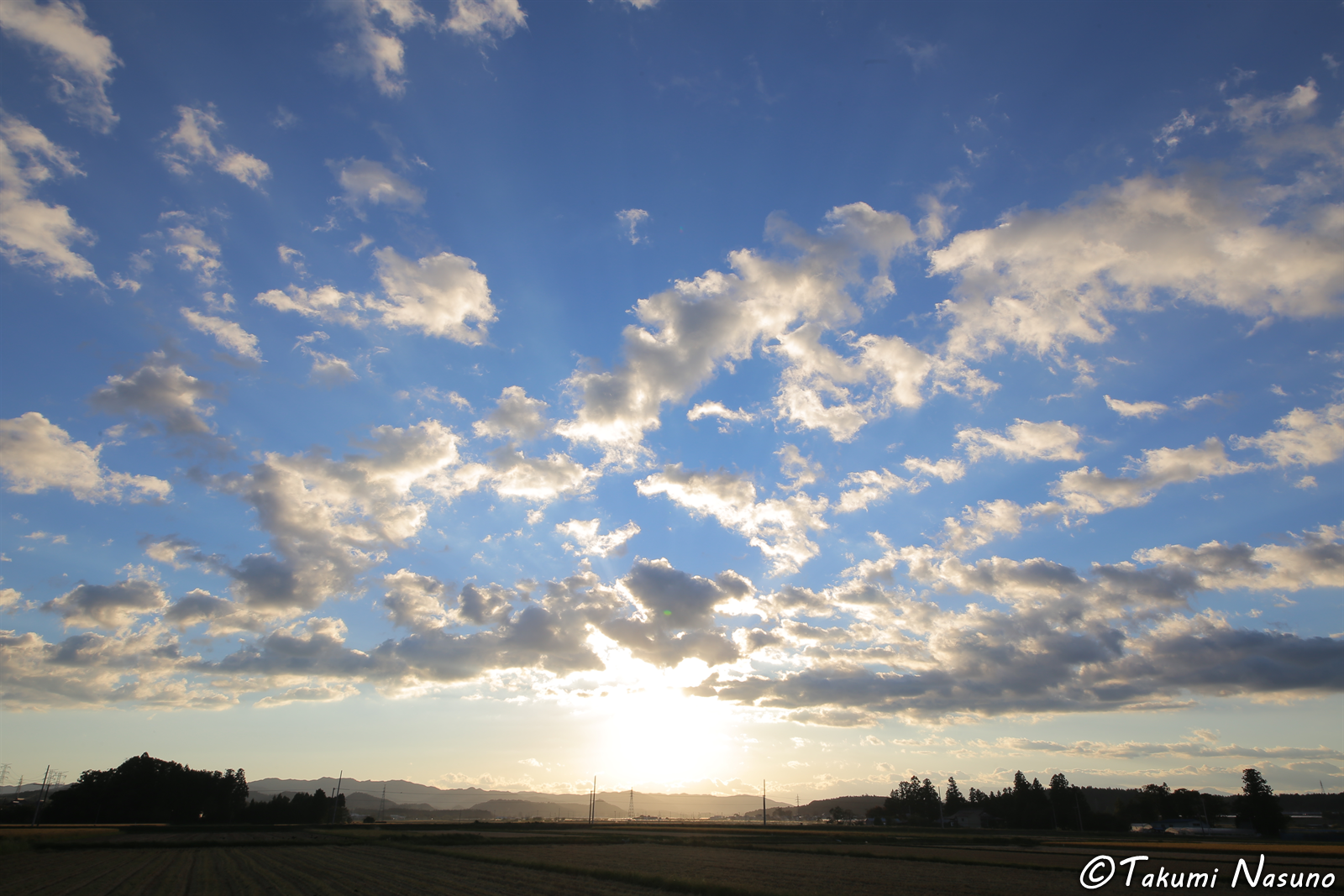 It was about to be the sunset time. Although there were lots of clouds, it seemed like I could take photos of the sinking sun because there was no obstacles near the horizon.

The Sky from Tanagura Town No.7 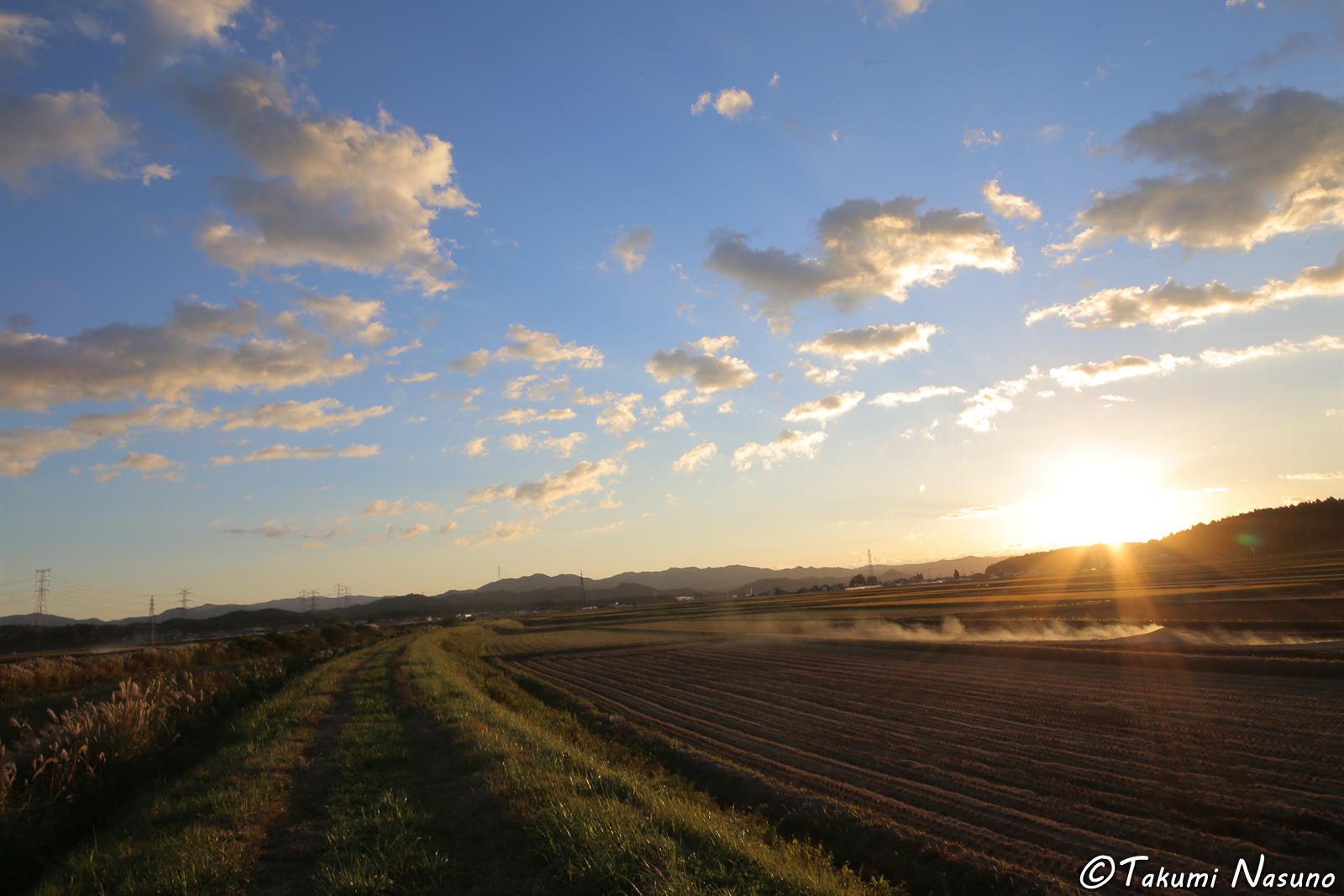 Here's a long-lasting road along the paddy fields. It was so comfortable and tranquil that I felt as if I could walk there forever. I took this tilted photo on purpose because I thought that the tilted photo would express the dynamic existence. Hmm... it might be when I want to feel how humans walk, isn't it?

The Sky from Tanagura Town No.8 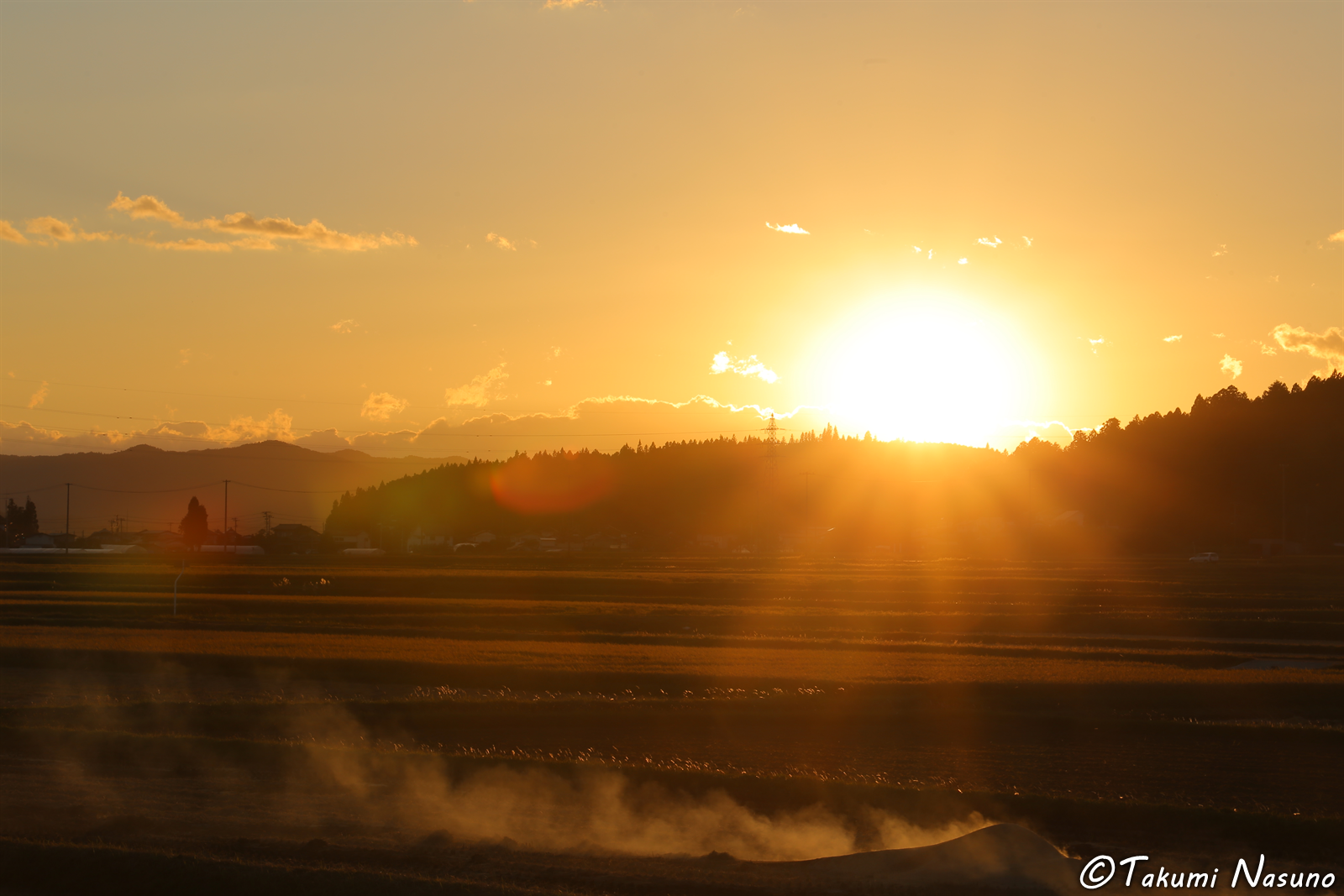 Here's a telephoto of the No.7. Despite using the telephoto lens, it captured the several layers of the wide paddy fields. It is a good point that we can take nice photos of landscapes with telephoto lenses at rural areas. I tried my best to describe the sunset time of Tanagura Town against the cruelly strong sunlight in the extremely clear sky.

The Sky from Tanagura Town No.9 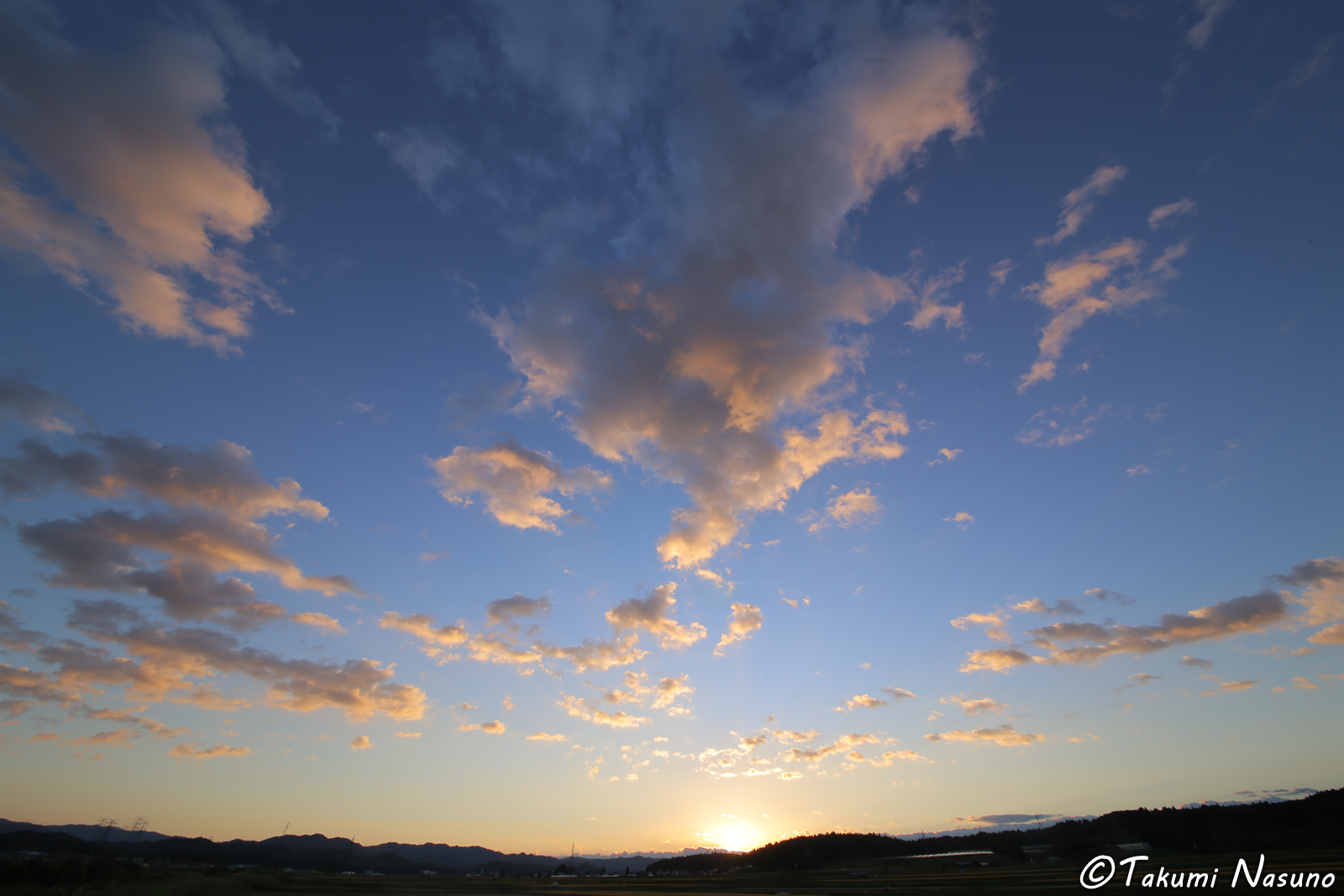 The long one day was about to end. The sun disappeared. Even after that, the sunlight painted the clouds a bit. The landscapes from the paddy fields had no obstacles. They were simply wide and wide.

The Sky from Tanagura Town No.10 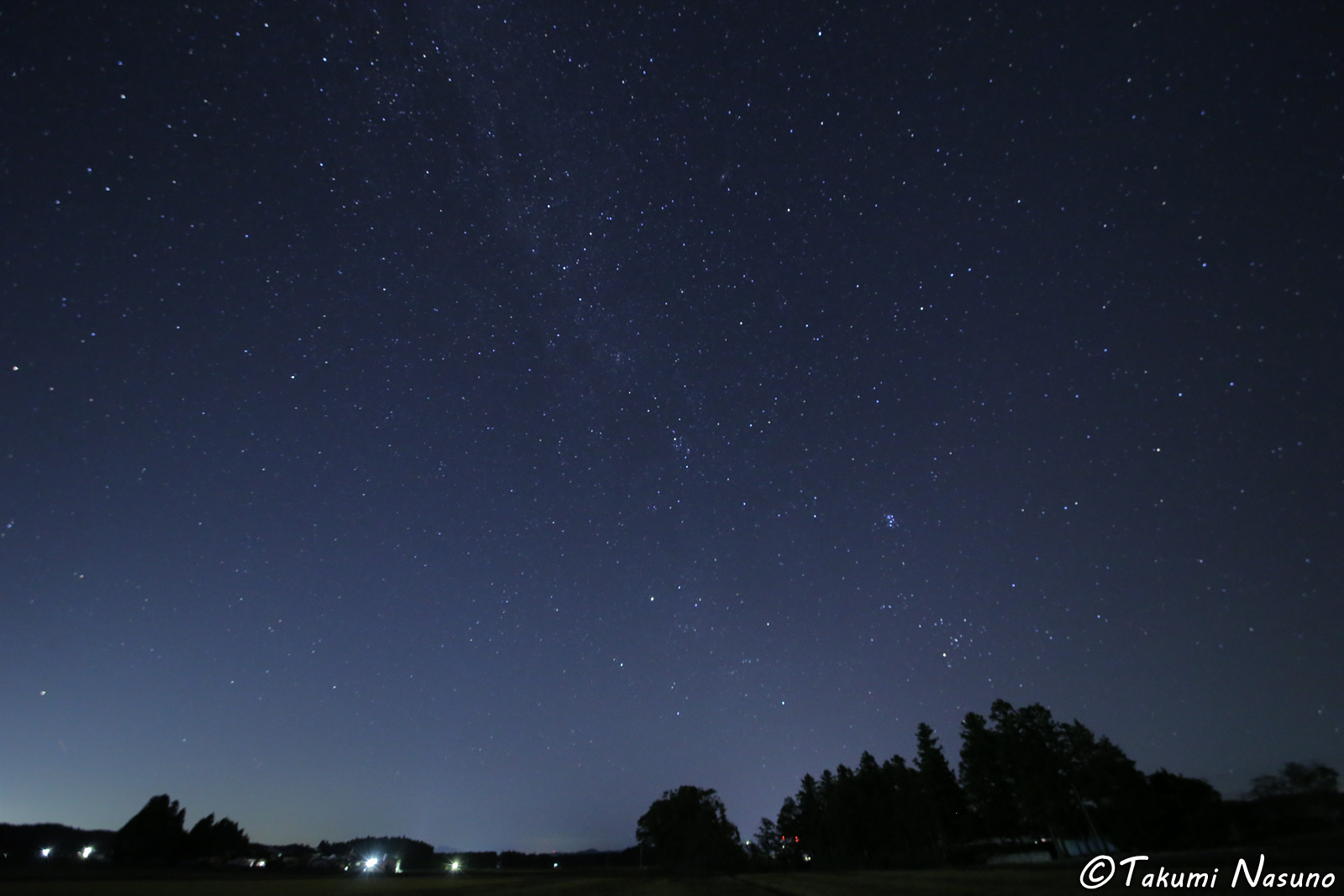 After the sunset time, we had a very happy moment of the starscapes! In the daytime, I was a bit worried. But tonight, the stars filled the sky without clouds. Oh, the milky way, long time no see!

I enjoyed the sunny blue sky, the sky with waving clouds at dusk, and the sky with sparkling stars in one day! Tanagura Town is, indeed, a nice place!!

Enjoy the posts of the same category!

Author of this Blog

Takumi Nasuno. Tanagura Supporters' Ambassador (Official supporter of Tanagura Town of Fukushima Prefecture). A man who recommends TRIPLESSO just as he likes. A multi-language blogger for mainly nature photography. Currently I'm off from my main job (knowledge management and data analytics) and devoting myself to childcare for my newborn baby for half a year.
Blog Category
Copyright (C) 2014-2019 Takumi Nasuno. All Rights Reserved.