While thinking why photography of the sun is great as an art, I came to conclude that SONY sounds the best in shooting the sun. Hey Canon, you can do it!

I felt that the sun is greater than any other subjects of photography as an art.

One photo made me hit upon this idea. When I shooted the sunset over Tsurumi River, I did take this photo, too. 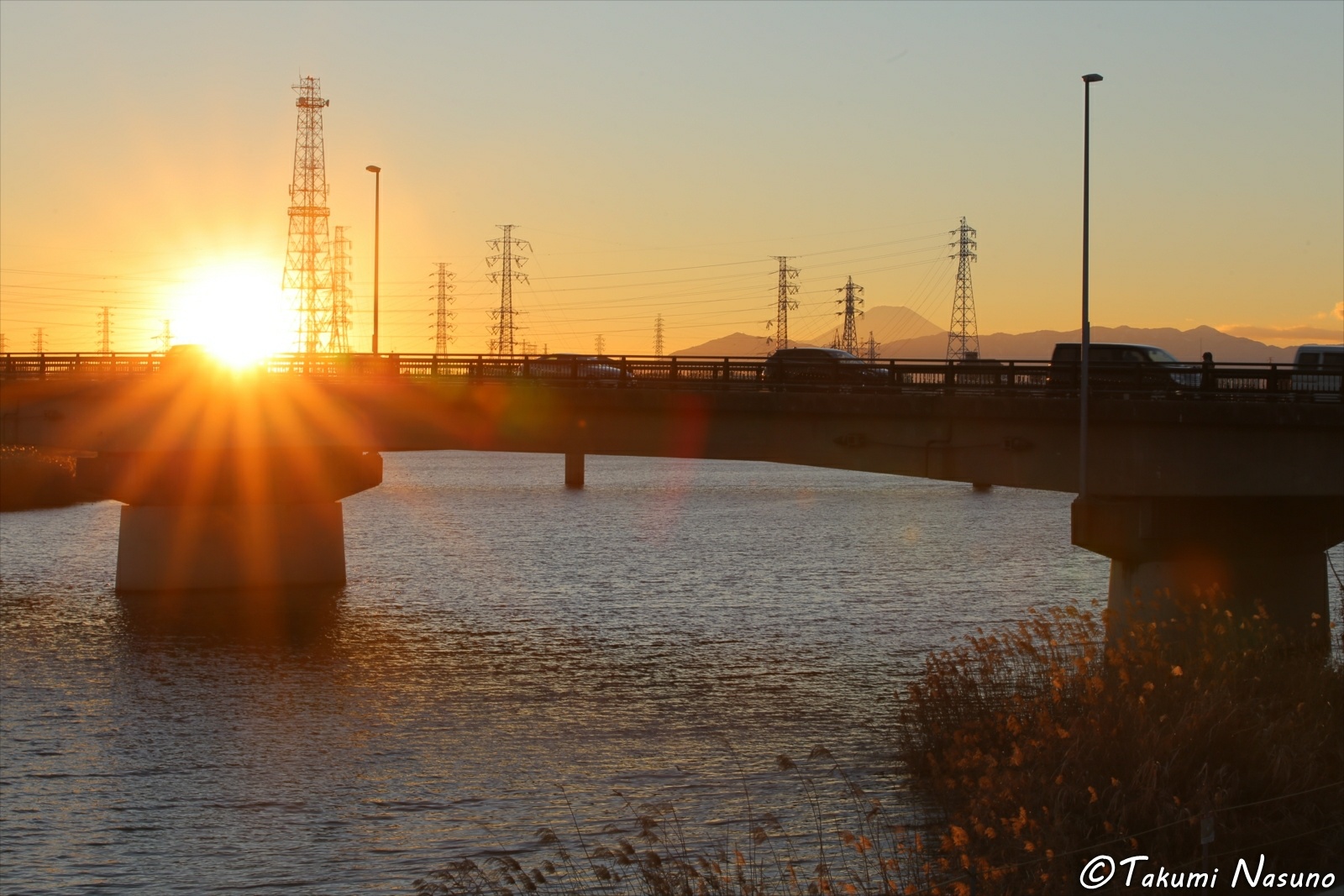 Takano Ohashi Bridge lies over Tsurumi River, the northern part of Tsurumi Ward. This is the pretty rare place where we can take photos of a bridge, Mt. Fuji and Phragmites together. (Phragmites is a relative of Japanese pampas grass.)

The chilly wind blew as strong as possible so that my hands over the camera were shaking. Although there were people quickly passing by, there were no one taking photos, other than I. Even in such a bad condition, I adopted the large F-number and set the shutter speed as slow as possible. F-number of 18 was more challenging than my usual setting of 16.

I looked through the finder and said,

Yes, the sun was too bright to see directly with my eyes. The temperature dropped suddenly and the chilly air made the sky highly transparent in the distance so that the sunlight shed straight as if it were not losing its energy at all. I couldn't pay attention to the direction of the sun... I tried to remove the ghosting out of the photo, but this attempt was all by the repetition of taking one photo and checking it on the screen. I couldn't remove all the ghosting, though.

But the sun appeared clearly there.

I realized one fact.

Thanks to photography, the sun, which is not allowed for us to see directly, can be described in the figure of what we believe that it looks like. Because we cannot see the sun, we try to see it through cameras. It is quite natural that humans intend to take photos of the sun.

We are not allowed to see the sun. The view that we think we are seeing in front of the sunset is the world that our brains create by adjusting the colors and the contrast subjectively. Therefore, the process of trying to take a photo which exactly matches the view in our brain is extremely subjective indeed. This is why I believe photography of the sun is great as an art.

I took photos this time and felt how great the EVF works. I can take photos of the sun while confirming the slight changes of the condition of the snow around the sun. It is dangerous to look at the sun through an optic finder. You shouldn't do it. Almost all the participants of my photography tour are surprised, moved and convinced by the quality of the SONY mirrorless cameras. Some photographers I know began to use them. It is natural. Even the professionals cannot overcome this difference in quality of the gear... (Quoted and translated from Kent Shiraishi Photo Studio)

Hmm... the adjustment towards the shining sun is not that good to my eyes. Even I were about to be willing to buy the SONY cameras. But I love how the Canon camera fits my right hand so I'm looking forward to the day when Canon develops a new one with EVF.

Hey Canon, you can do it!