It turned out that the compressibility of photos uploaded to SNS is dependent on their wavelength, like Mr. Kent Shiraishi said.

Wow, it's quite surprising. It is really dependent on wavelength...

I'm not sure why, though. 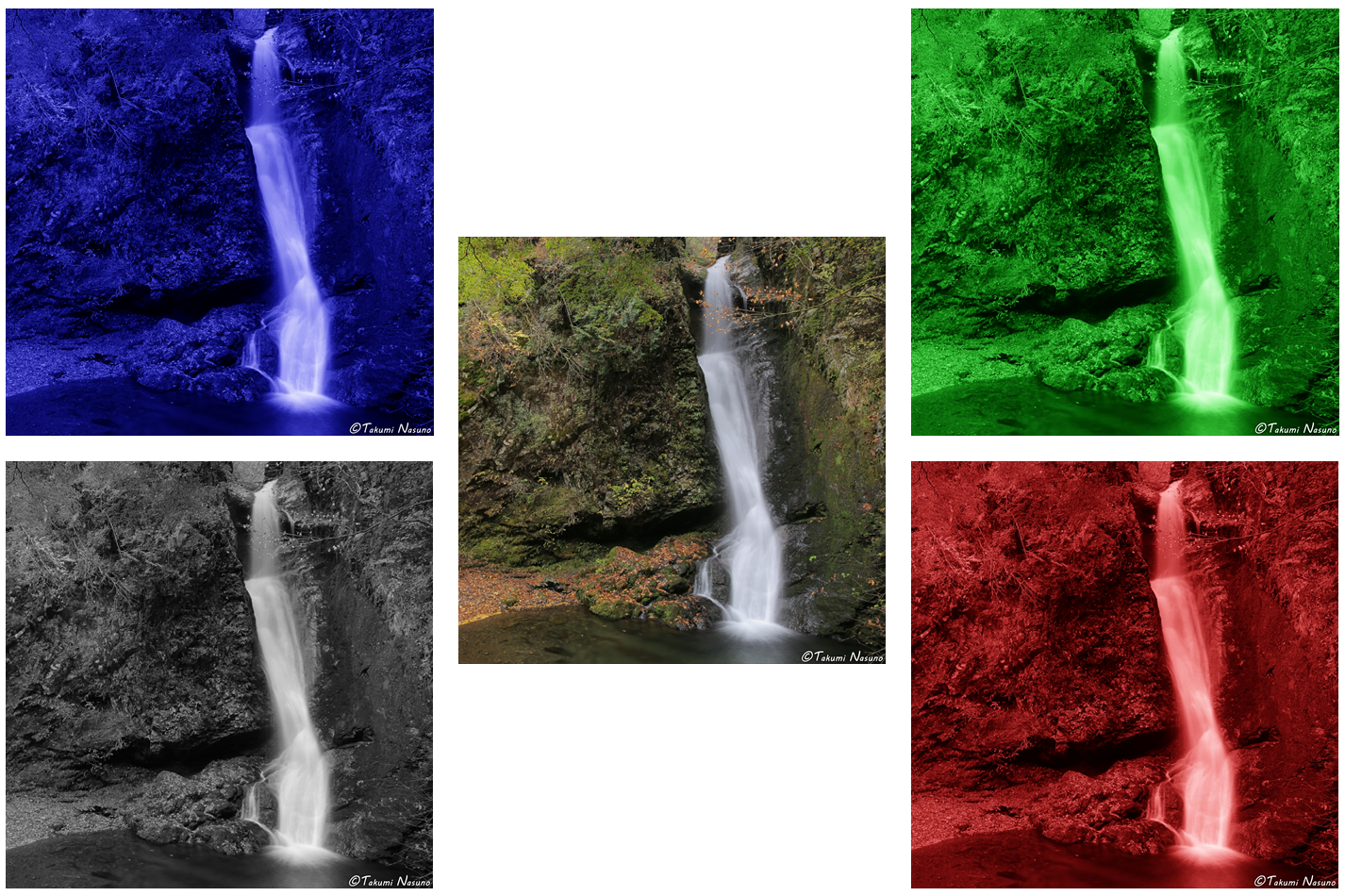 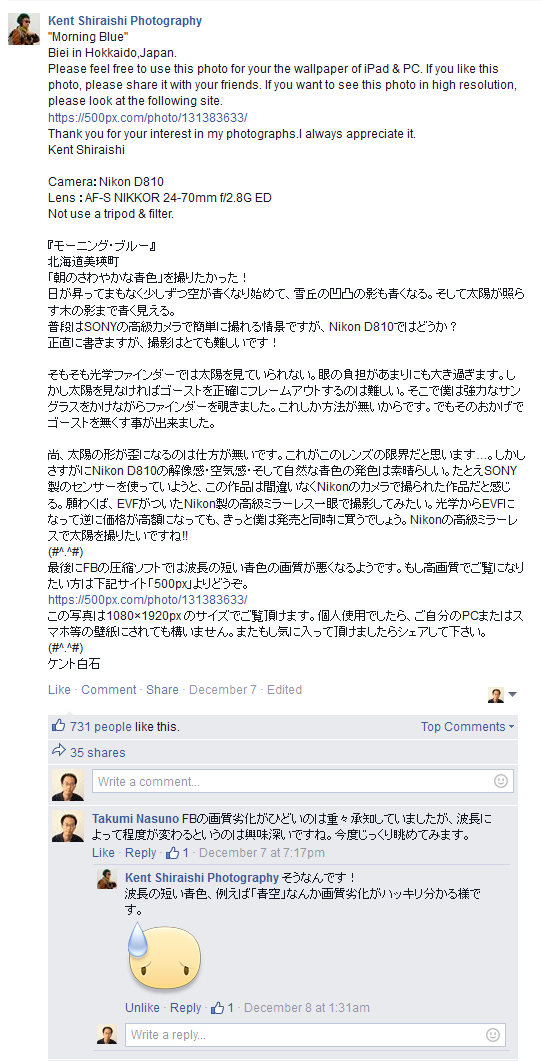 He mentioned it at the end of his comment.

It seems like the picture quality of the blue color, whose wavelength is the shortest among visible lights, deteriorates the most badly through Facebook's compression software. (Quoted and translated from Kent Shiraishi Photography on Facebook)

It was just overwhelming. I had only thought that the picture quality of photos on Facebook is simply bad. He says that quality deterioration might be dependent on wavelength (color). It doesn't mean that I stop using Facebook even if it is true. But I must know the truth as a photographer who works mainly online!

This is why I conducted a research.

The method is very simple. I prepared a square photo, and changed its color to grayish, reddish, greenish, and bluish. Then I uploaded 5 photos including the original one to SNS and compare the file sizes there.

By the way, I used the free software GIMP to change colors. In the first place, I did decolorization and made a gray-scale photo. Then I did color balance adjustment and changed it to red, green and blue colors. As I know that the repetition of saving deteriorates the picture quality of JPEG, I made these photos by saving only once for each.

The result is here. 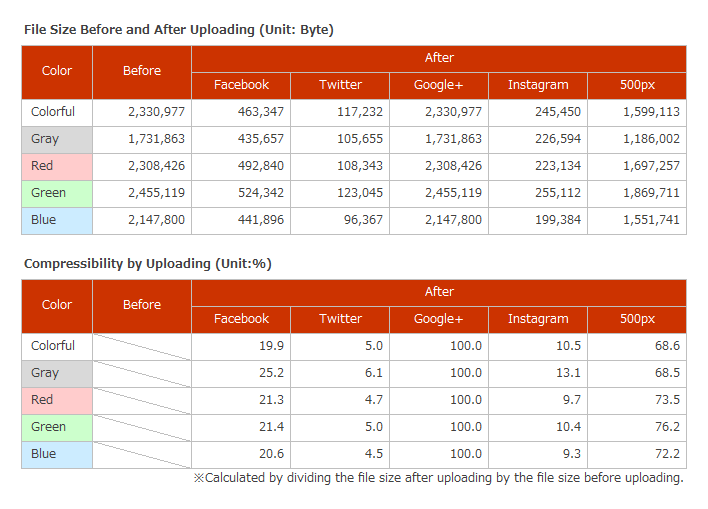 First, I was amazed to see the stage of color change. It turned out that the file size changes when the color changes. The greenish one is the largest. The reddish and the bluish follow it. The grayish one is the smallest. Ah, well, why are these mono-color photos larger than the original? Hmm, I'm not sure why...

I ignore this issue because its not relevant to the main topic.

According to the compressibility by uploading, it turned out that...

The blue one is the most compressed in all the SNS!

Well, I've excluded Google+ because it stores original photos, which means no compression is conducted there.

Although the differences are small, and although I'm not sure why, It turned out that the blue color deteriorates the most badly in picture quality. And it's true in all the SNS. It's an interesting finding. If Mr. Kent Shiraishi recognized this fact only with his eyesight, he must have incredibly great eyes.

Then I compared 5 SNS. It turned out that photos are more compressed on Twitter and Instagram than on Facebook. My intuition cannot agree with this phenomenon. I looked at the photos thoroughly and found out that...

Considering the pixel change rate, I calculated the quality deterioration per pixel here. 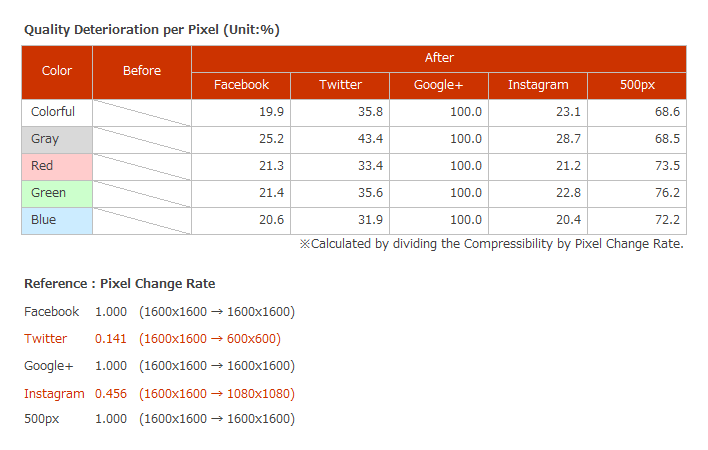 OMG, photos on Facebook deteriorates the most badly. As I often see smaller-sized photos on smartphone apps, I feel that the picture quality looks even worse on Facebook.

Despite its small file size, Twitter doesn't seem to conduct severe quality deterioration, compared with Facebook and Instagram. I do not feel that Instagram shows bad picture quality because I only see photos through a small screen of my smartphone.

Compared with these SNS, the compressibility of around 70% by 500px is excellent. This is why many professionals and semi-professionals are aiming for tomorrow's big offers there... Ah, well, I want to say so. But Google+ is too excellent. Google+ stores ORIGINAL photos. They are making too much effort. This is how Google dominates the world...

Now let's go on to my conclusion!

(Instagram is as bad as Facebook. But thanks to limiting the devices, I do not have to care about the quality deterioration.)

I concluded that if I want to show my photos as good the quality as possible, I need to prepare my own website with my own domain and control the file compression by myself. I'm really happy that I have my own blog here. *smile*