I understand how I grew up this year by challenging Jewelries of Shonan, one of the Three Major Winter Illuminations in Kanto

What a big difference in one year...

OMG, I realized that I had done a bad job a year ago.

I challenged the illumination called "Jewelries of Shonan" at Enoshima Island last year. I was overwhelmed by the dominant lights on the open field, which I thought were much greater than those in Tokyo. Because I remembered this fact, I decided to challenge the illumination this year again, only to find how I grew up this year.

Let me compare my photos of this year with those of the last year!

The first is the Shinto gate of Enoshima Shrine. Not illuminations, though. 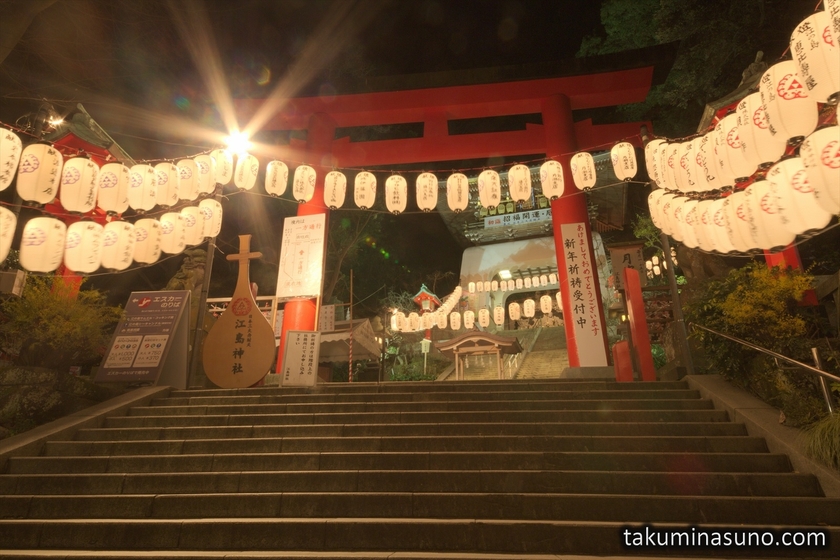 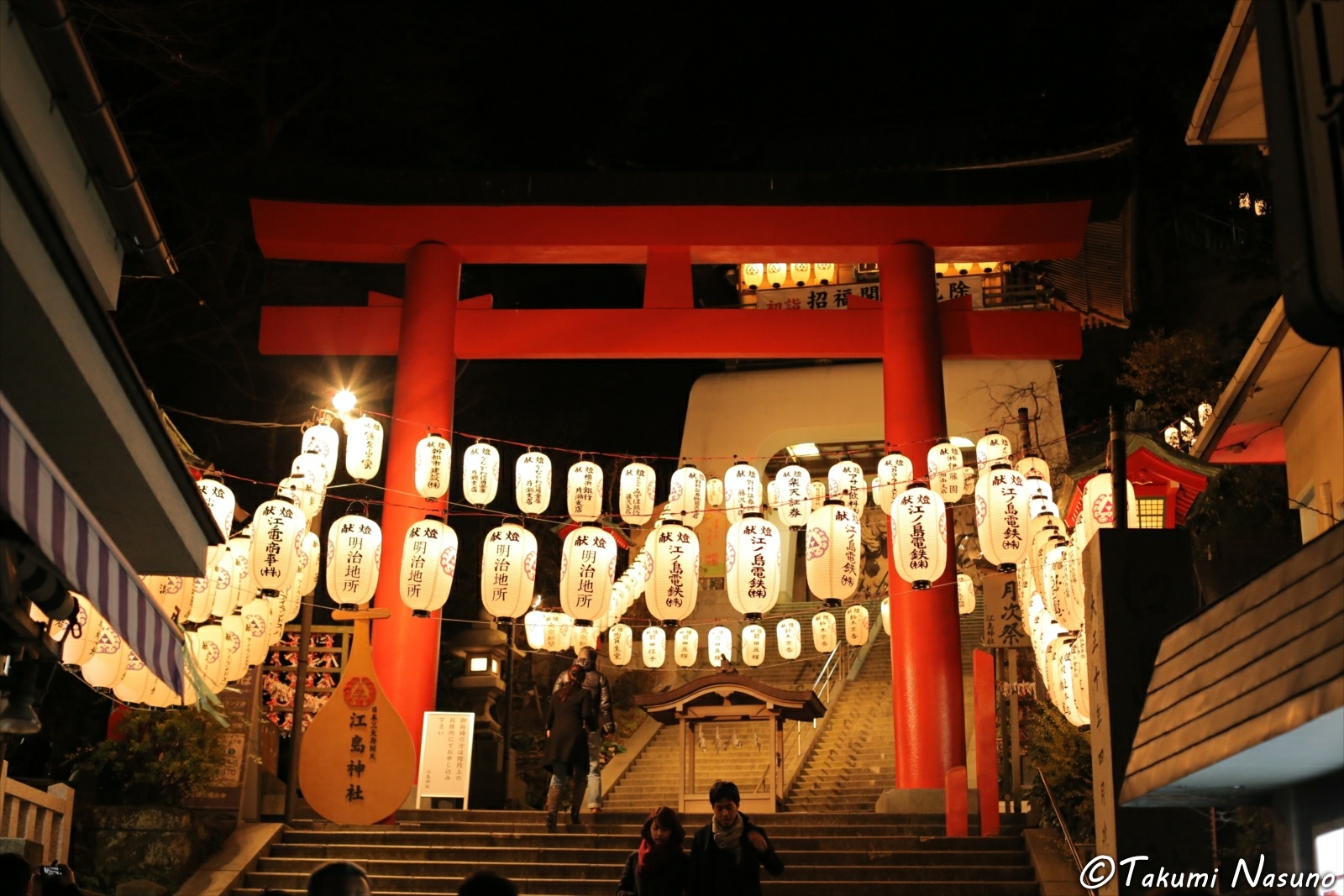 I used a different lens. I chose the standard lens of 50mm. I adopted the shutter speed of 1/50 seconds so that I could make the pedestrians appear clearly without camera shake. It is not morally allowed to use a tripod here so I gradually made F-number smaller while raising ISO value to be 2000.

However, I cogitated how I shooted the lanterns so I managed to reproduce how I was seeing the surroundings almost perfectly. Of course, the lanterns don't have any blown out highlights. The focal length of 50mm added the natural impression to the photo.

Comparing the two photos, I severely felt that photos will easily be different even when the same person shooted the same place.

The next is the main subject, the free zone of the illuminations of Enoshima Island. 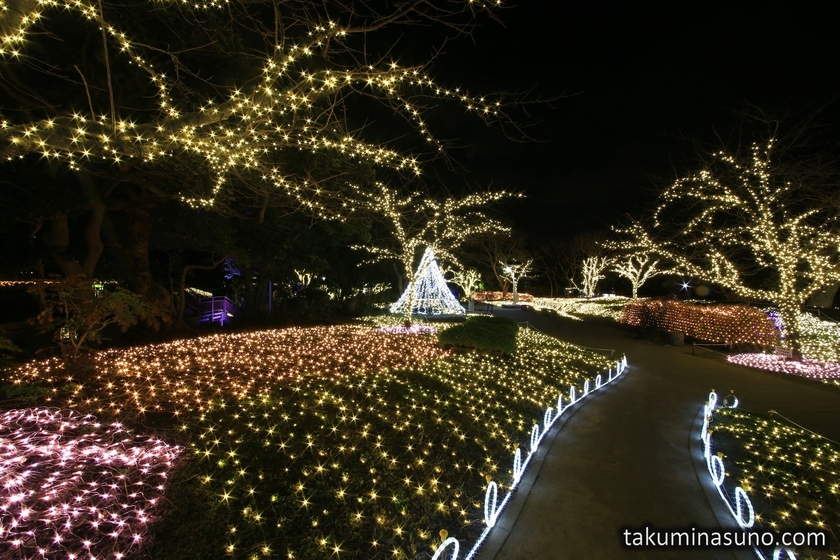 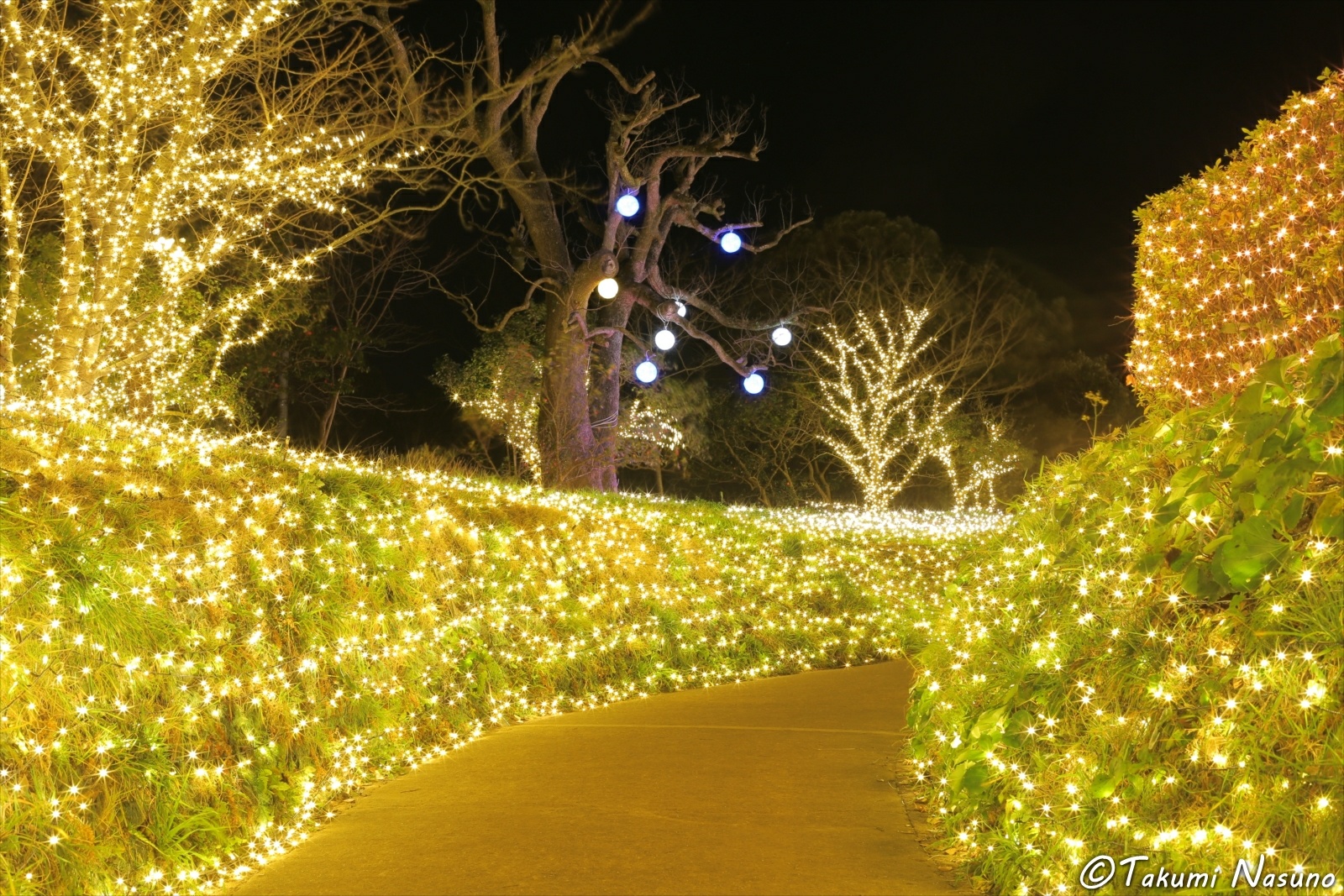 Hey, please wait for a moment...

What on earth did I take a photo like this last year?

First, I used a different lens. Of course the standard lens of 50mm. Even in Enoshima Island, the illuminations are just illuminations. The super-wide-angle focal length of 13mm made the dark sky appear much wider and the lights smaller. 13mm is too wide as a human's eyesight. 50mm looks great.

Second, I took this photo from a lower angle. There's no way but taking advantage of the grouping lights at the both sides of the banks. I adjusted my tripod lower to be around 30cm. Plus, I took this photo as if I were looking up the slope from its bottom end so that the lights spread widely and thickly inside the frame. This has a lot of influence on how you see the photos.

I adopted the F-number of 16 so that everything looked clear in my photo. The appropriate shutter speed was 20 seconds. Well, I needed my tripod this time. I tried this several times and got the photo above when no pedestrians were walking during the 20 seconds.

... I cannot understand why I did make the F-number to be 22 in such a dark place last year.

Then, the next is the Wisteria from the paid zone. 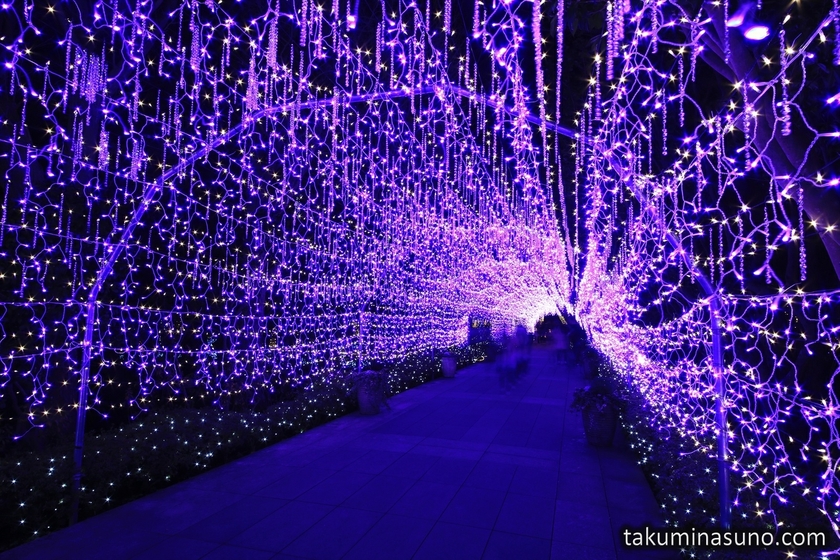 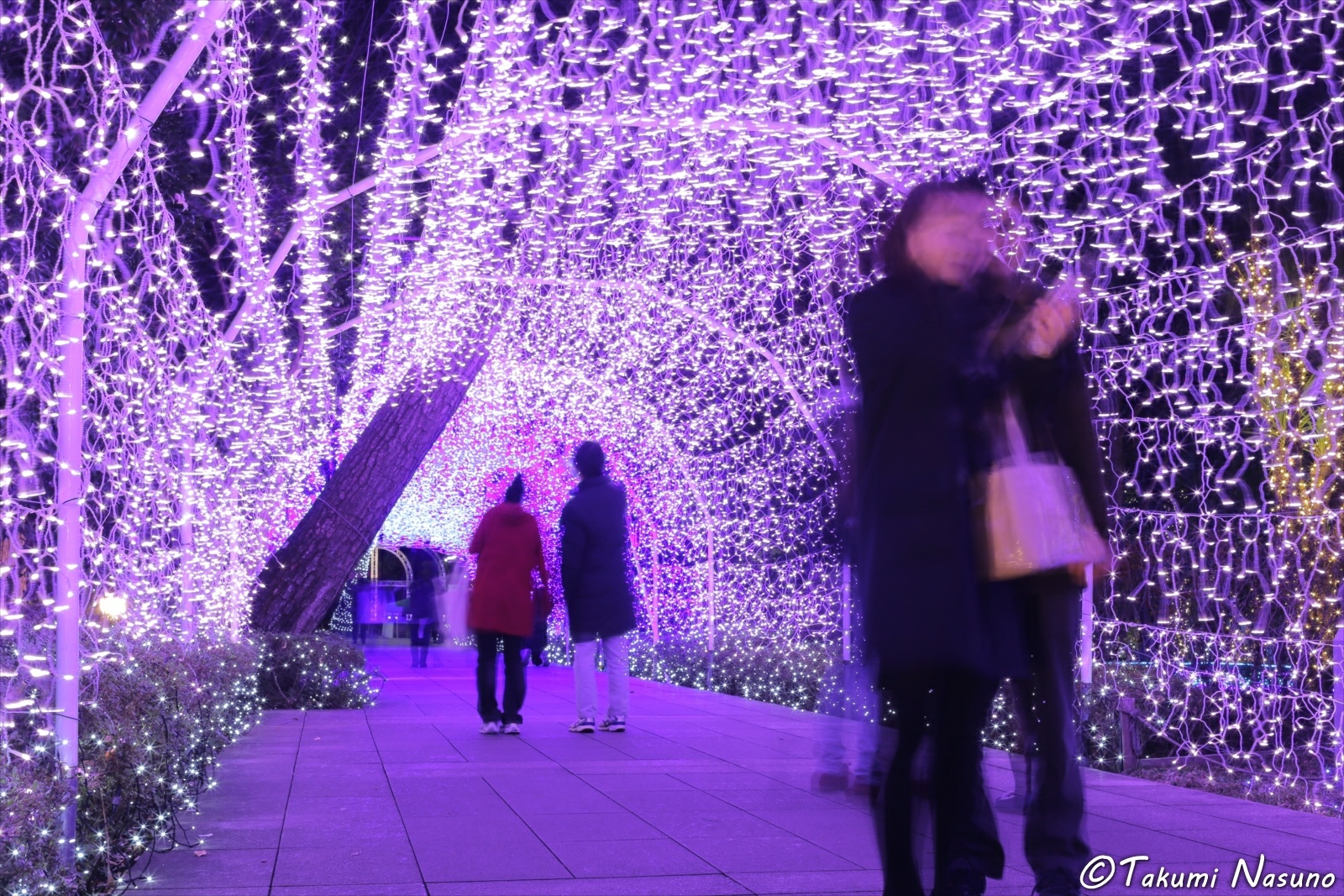 I ended up using the standard lens of 50mm when I shooted the Wisteria. If I used a wide-angle lens, the distance between each of the lights, especially near my position, got longer because a wide-angle lens makes something nearby appear larger. I thought that there are much less illuminations suited for wide-angle lenses.

This year, I took this photo from a bit lower angle, the same way as the one in the free zone. The photo has an uncountable number of lights within the frame. I added the pedestrians at the front and the back of the photo so that you can feel the depth of the tunnel. The shutter speed is 5 seconds, long enough to make the faces of the standing pedestrians un-recognizable.

As a result, I adopted the F-number of 16. The illuminations themselves, the ground and the bush at the both sides are now modest in brightness.

Then, the next is the illuminations in front of Enoshima Sea Candle. 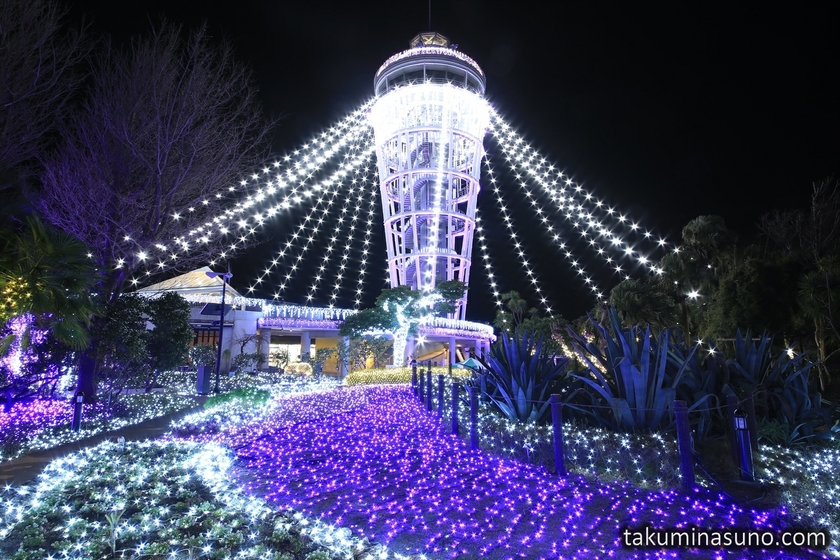 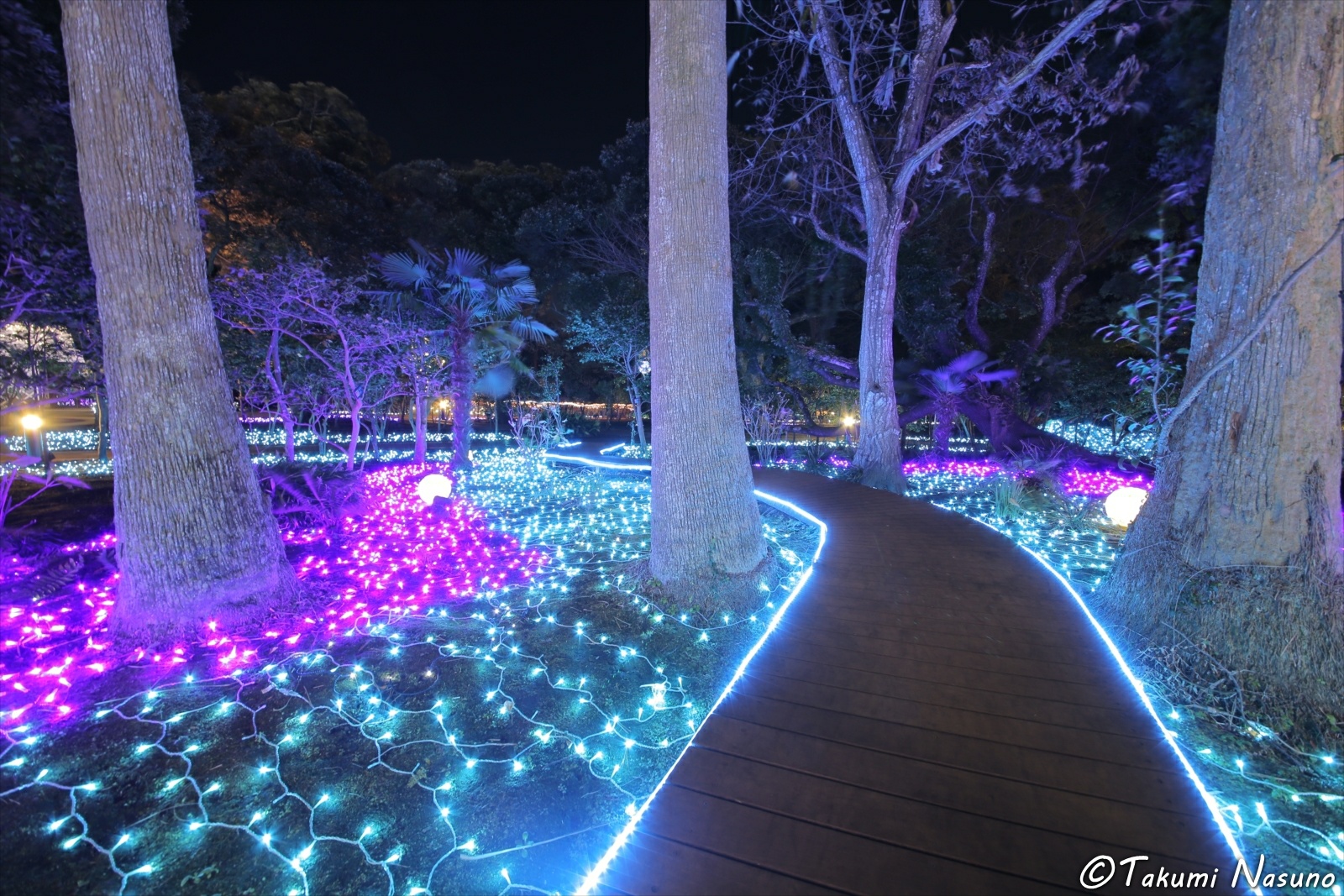 I was being like a tourist who took a photo with the big Sea Candle in the center. This is quite similar to common sightseeing posters anywhere. This is not original at all.

This year, I looked back and set the Sea Candle at my back to shoot the winding bright path. The trees were shining in blue thanks to the green lights and the purple lights.

I adopted the small F-number of 8 so that I set focus on the three trees and made the inner side to be only the background. The focal length was 24mm, the tele-side of my wide-angle lens. The photo was like a play of a wonderland.

The last photo was the shining ropes of the Sea Candle. 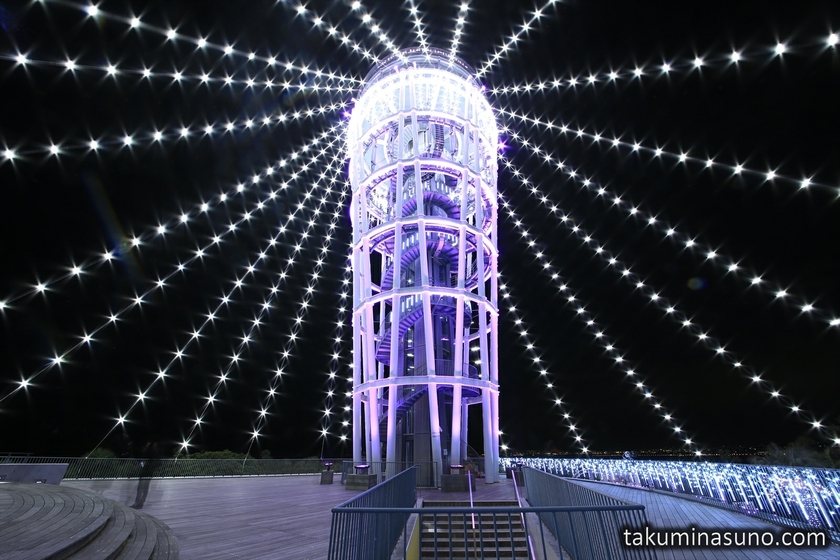 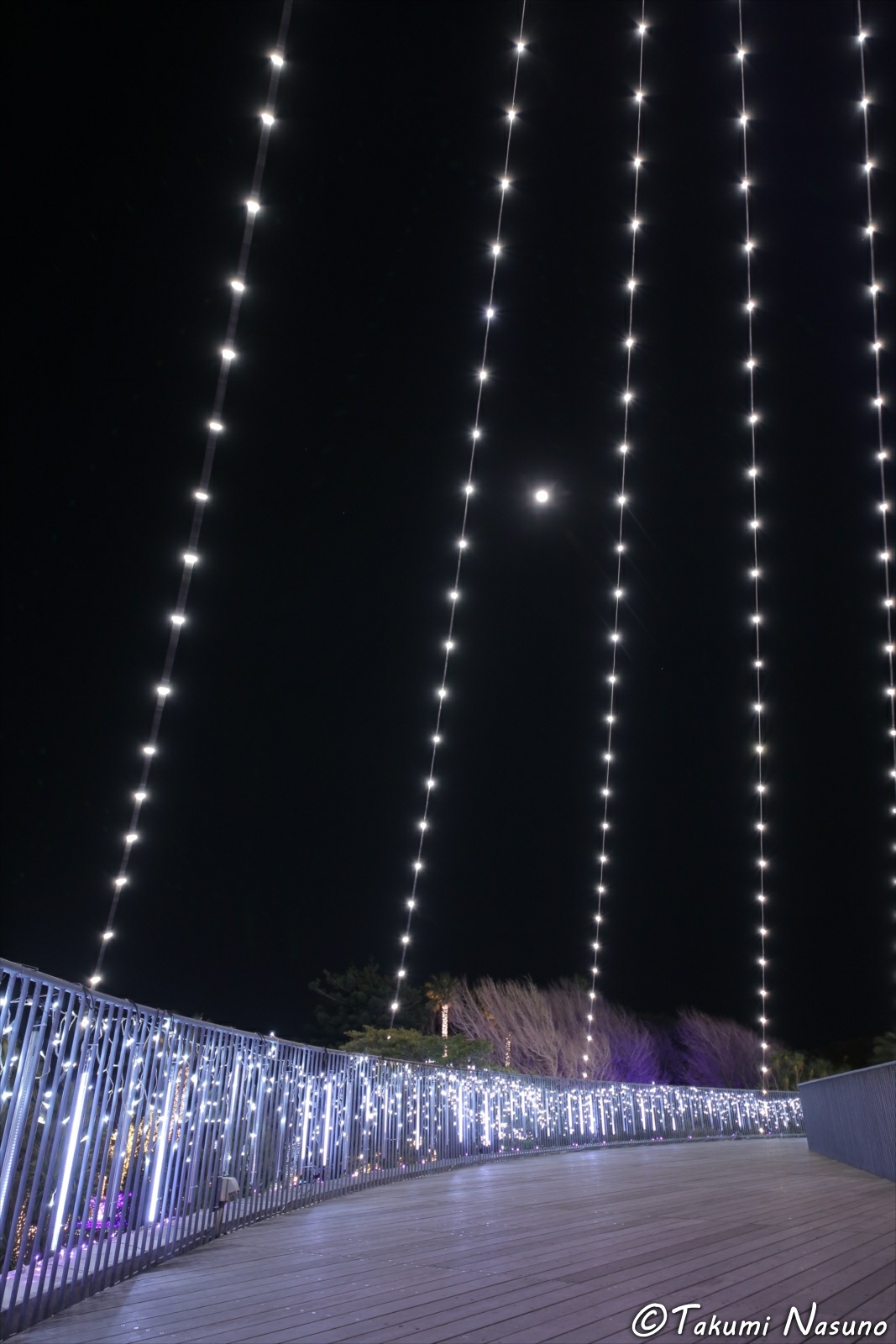 Last year, I sadly adopted the super-wide-angle focal length of 12mm so that the whole candle somehow appeared into the frame. This is an ordinary composition.

This year, I tried to go beyond such an ordinary composition by targeting the moon. Indeed, today is the day of the full moon. The moon was shining in the nice height tonight.

I adjusted my shooting position and angle so that the moon appeared in the center of the shining ropes. As the ropes were always moving, I adopted a rare setting - the smallest F-number of 5.6, the shutter speed of 1/2 seconds, and ISO value of 800 to prevent the motion blur. The main subjects were the moon and the ropes. I used the focal length of 24mm, the tele-side of my wide-angle lens, to frame out the Sea Candle.

I thought that shooting the moon with the wide-angle lens was the first time since Oze. I had a romantic impression when I saw the moon at the center of the bright dots in the night sky.

I understand how I grew up this year from these photos. The photography gear is the same. But I saw a big difference because of the difference in my skill and my idea. I'm looking forward to taking photos at Enoshima Island next year.