High-Quatity Juice Aged for One Year! Osawa Grape Premium Juice from Yokote ViNERY is Welcoming You with its Thickened and Sweet, Heart-Moving Taste!

I have lots of visitors here so I added the link to the sequel. 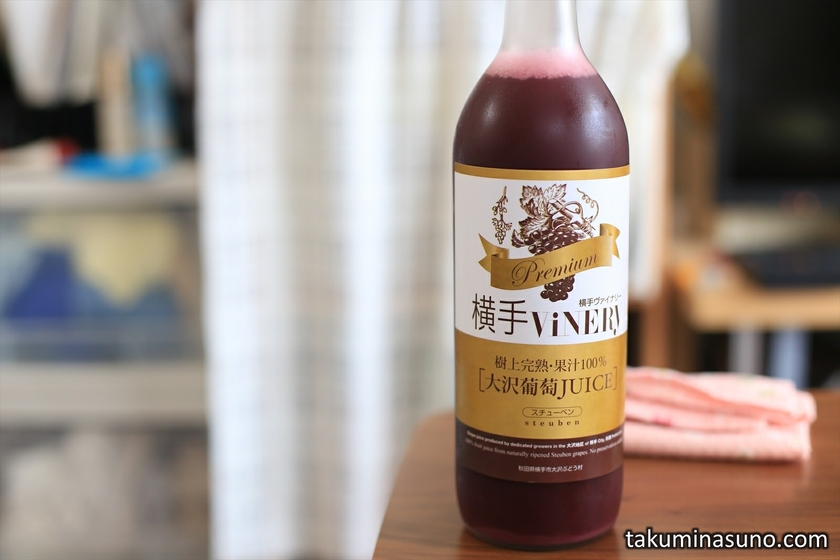 It is worth the word "aged for one year"!

Well, I am pretty excited because...

There was a fair of Akita Prefecture at Shinjuku the other day. I happened to find a juice, which I found to be so thickened and sweet that I ended up buying it in a minute.

They had two kinds of juice - one was new (meaning made this season), and the other was called "premium", being aged for one year. The "premium" was more expensive by 100 yen, but the taste was so different (less sour and more thickened) that I decided to buy the "premium" one. The price was 1380 yen as far as I remember. This price is sure to be categorized as "high-quality juice". But it is still not that expensive when I consider how much I paid for bottles of delicious Japanese sake.

This juice is overwhelmingly delicious and high-quality, and the greatest point is that this is not alcohol. Even those who can not drink liquor can drink it! I would strongly like to recommend this "premium" juice for those who do not drink liquor.

Later, I cooled the juice in the refrigerator and drank it to find the true deliciousness of the "premium"!

Whatever food I ate together, this juice was so delicious that it dominated my mouth, I mean, I found it extremely difficult to prepare dishes which are as delicious as this.

The sad new was that this "premium" juice is not available in Tokyo, or rather, both of them are only available at the store of Yokote City Tourism Association. Although the normal version is available on the internet, the "premium" version is not...

I asked one lady from the association, saying that I would surely buy this juice again but I would have few chances to go to Yokote City. Then she said that they would deliver the "premium" juice after getting an order over phone. This is a bottle of the special juice I would like to drink in a special occasion.