【Great Ota Ward】 Astonishing Light Taste of Perilla Pork Full of Umami and Bard is Available at Marushin Meat Shop! 【Only One in Tokyo】 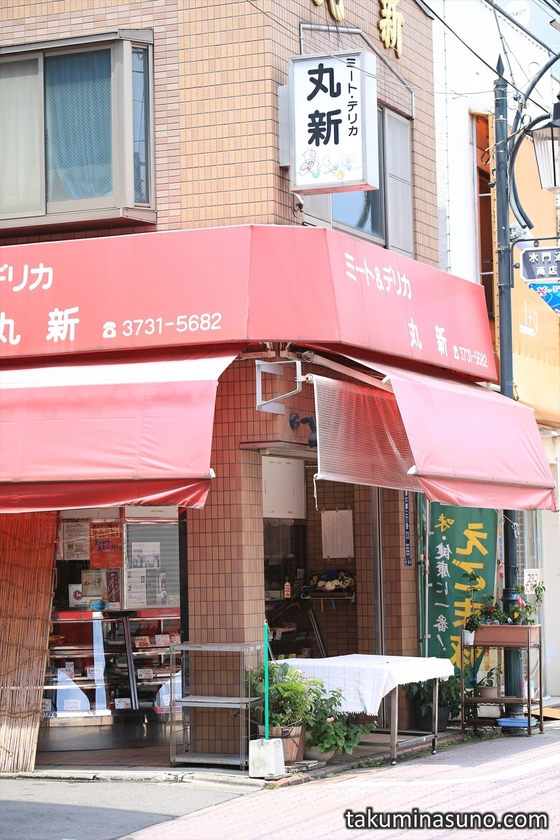 Well, this post is different from my usual posts. Here's a meat shop offering astonishing meat which is delicious enough to make me write down the first post for Ota Ward of Tokyo.

The name of this shop is Meat & Delica Marushin, located in the shopping street of Zoshiki, Ota Ward. As you see, the shop itself looks like a common shop often seen in traditional shopping streets. But this shop offers a special kind of pork. 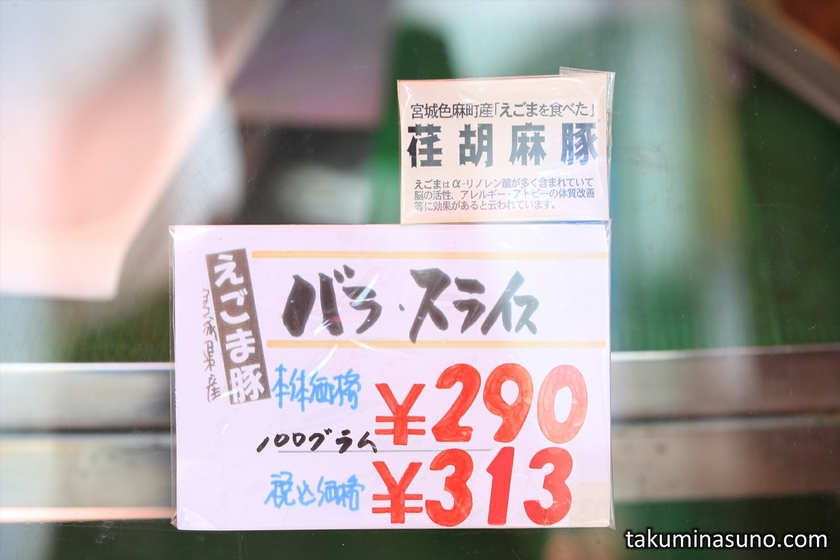 This is Perilla pork!

Thanks to the strong trend in consumption of healthy foods in recent years, Perilla is being sold out throughout Japan. The production is, so far, not catching up the demand. (They produce Perilla in Tanagura Town, of course!)

To my surprise, this shop offers the Perilla pork from Shikama Town of Miyagi Prefecture, which of course grow by eating Perilla. They are twice or three times the price of normal pork in super markets. But you will definitely find the special taste of Perilla pork once you eat it. 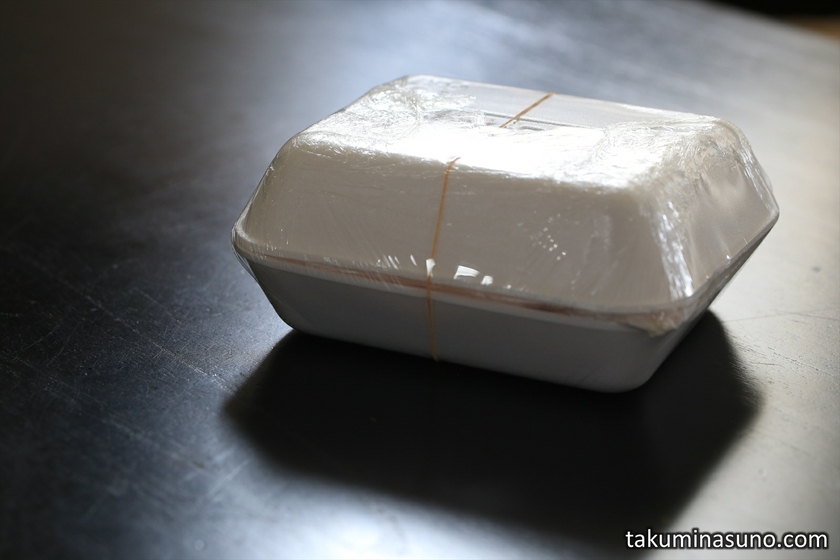 As I arrived too early, some of the pork were not available. But I managed to buy the most popular one, the back ribs. They packed the pork with care. I would like to buy uncured ham of Perilla pork next time, which was sold out today... 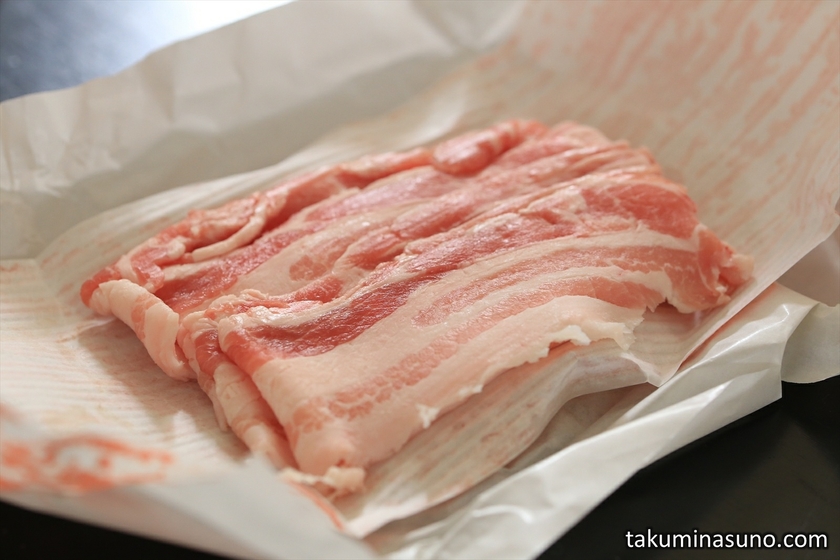 The inside looks like this. The bard very much stimulated my appetite. 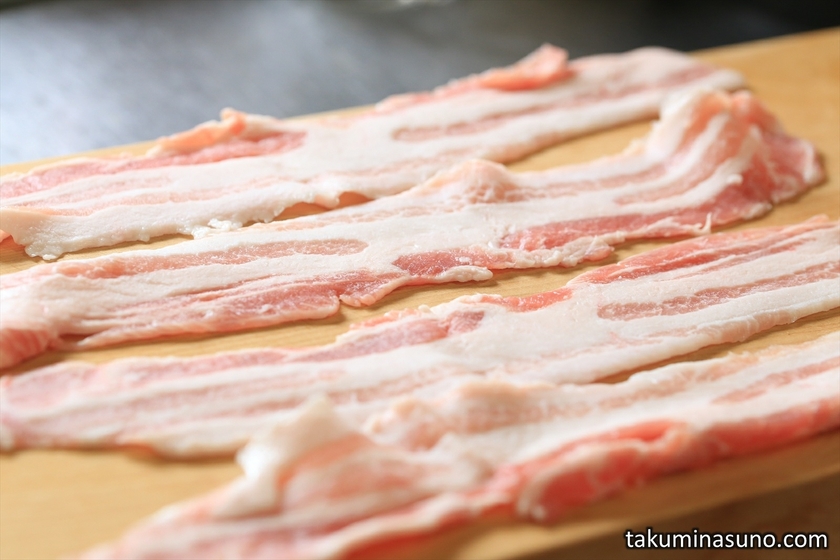 They sell pork and other foods by weight, and four slices of the Perilla pork is less than 400yen. Each slice was so long that I cut them into two slices, and baked them. The old man in the shop told me that I only needed to add salt and spice because the pork itself is pretty delicious. 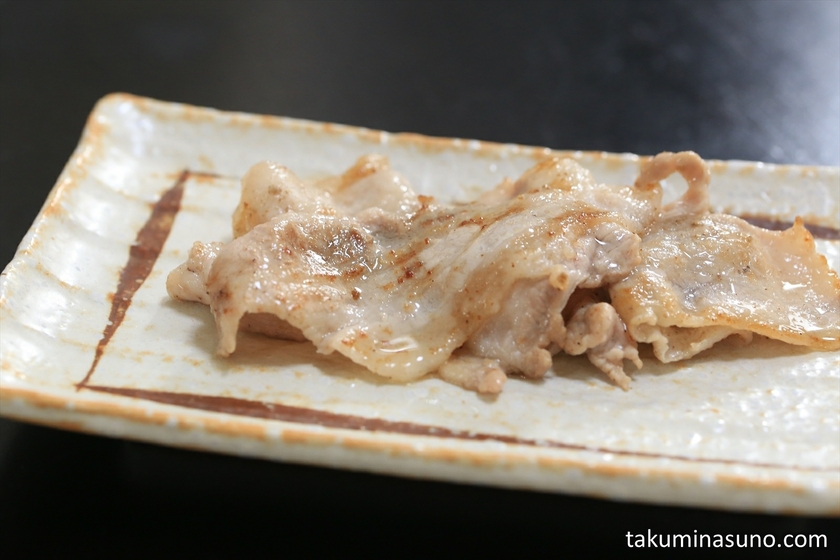 The nice flavor from the pork filled the room while I was baking them, which sharpened my appetite further.

Two slices will be enough for one person. As I bought four slices this time, I can eat the other two next time. The price is not that high for such delicious pork.

I ate them with freshly cooked rice. The taste was astonishingly light. It was much beyond my expectation because I expected the perilla pork to be very heavy with the bard. It was not like pork, but like chicken or baked fish.

It was so light and delicious that I ate several bowls of rice with the Perilla pork with only salt and spice. The perilla pork has plenty of α-linolenic acid. It is full of Umami, but the taste is astonishingly light. The lady in the shop told me that the taste is so different from common pork that even people who cannot eat pork can eat Perilla pork. She also told me that I cannot understand the difference before eating them. That was true.

The great news was that this is the only shop in Tokyo which sells Perilla pork. To tell the truth, I came to know Perilla pork because I happened to find this shop. The shop is close to my house so I will come here again.